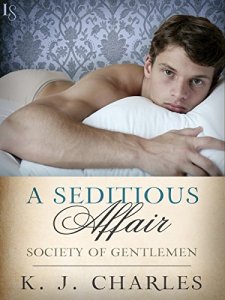 A Seditious Affair is the second book in KJ Charles’ A Society of Gentlemen series of Regency-era m/m historical romance novels. I am going to end up reading this series in reverse order due to the timing of when I received the digital holds from the library network.

Dominic Frey has some slightly unconventional needs, and he has a weekly appointment with a like-minded individual. These interludes provide him with an escape from his job and his friends, and while he doesn’t have much in common with his Wednesday partner, there is one thing that they share.

Silas Mason is a seditionist, and he loathes everything about the government, but he enjoys spending Wednesdays with his Tory. Over the course of the year, they have established a rapport and share wine and books with each other. They both look forward to Wednesdays, but neither of them ever thinks about meeting up outside of that standing appointment.

But Dom and Silas’ worlds collide when Dom, as part of his job in the Home Office, investigates Silas’ bookshop, which has been suspected of writing incendiary pamphlets. This changes everything, and Dom is faced with some difficult decisions about obligations and responsibilities and what it means to be a friend.

I liked this book quite a bit. It was the second book that I read in the series, and I was looking forward to reading it after allusions that I picked up on in the third book- which was the first book that I read. Dom and Silas have an interesting dynamic. Put simply, (now that we’re after the page break), Dom prefers a submissive role in his encounters; Silas never really explored taking a more aggressive/dominant role until after the arrangements were made for their Wednesday appointments, and he has enjoyed exploring this new side. Dom and Silas have wonderful chemistry, and it was just delightful to watch their relationship evolve over the course of the book as they realize that they care for each other outside of their Wednesdays.

I would recommend A Seditious Affair. This book does function well enough as a standalone, but I do think that it’s probably best to read this series in order. The secondary characters are well rounded, and Charles has paid particular attention to historical details. I am looking forward to reading the beginning of this series, as well as catching up on Charles’ other books.