I want to begin this review by saying that despite the cute cartoony image on the cover, this graphic novel contains explicit sex scenes, and it is not suitable for children of any age.

Kennedy’s world turns upside down when he walks in on Seth, his boyfriend of six years, having sex with another man on their kitchen counter. Despite this monumental betrayal of trust, Kennedy is willing to work on their relationship, but Seth tells him the relationship has been over for a long time and he’s done forever.

A dejected Kennedy retreats into his beloved video games, and then the combination of a power surge and um—bodily fluids—zaps Kennedy into the world of video games.

END_OF_DOCUMENT_TOKEN_TO_BE_REPLACED

This is the third book in Hall’s Kate Kane: Paranormal Investigator series of contemporary urban fantasy novels. There are plenty of series where the books function as standalones, but this is not the case with the Kate Kane books. Readers need to start with Iron & Velvet in order to understand what’s going on.

Frankly, I’ve read the first two books and I still don’t know what’s going on. I don’t mean this as an insult—the book is wonderful, but the plot moves along quickly and there are so many factors to consider that it’s hard to explain to others. But I’m willing to give it the old college try.

As the series title suggests, Kate investigates matters that conventional sleuths wouldn’t be able to handle. Her work has landed her in the middle of an otherworldly turf war and the stakes couldn’t be higher—if the wrong faction wins, the entire world would be doomed. END_OF_DOCUMENT_TOKEN_TO_BE_REPLACED

I don’t remember where I heard about Apple Boy, but I immediately told my friend Andie about it, and a couple days later, she pointed out that the narrator of the audiobook was giving away codes for free audiobooks- including Apple Boy!

I don’t read very much fantasy at all, but the premise of this book sounded interesting: a secret prince and a farmer’s son? What’s not to like?

Win is a prince, but he’s so filthy that you wouldn’t believe him if he told you- which he wouldn’t, because the last time he told someone he was a prince, they robbed him. Desperate for money to afford the coach fare to the city, Win takes a job picking apples for a cruel farmer.

But the cruel farmer has a hot son named Adam, who takes pity on Win. END_OF_DOCUMENT_TOKEN_TO_BE_REPLACED

This is the second book in Hall’s Kate Kane: Paranormal Investigator series. The Kate series first appeared a few years ago, but has been republished by Carina Press.

Readers should start with the first book—Iron & Velvet—which introduces Kate and her world, but I’ll offer a brief spoiler-free TLDR for readers who want to read this review. Kate lives in contemporary London, all the fictional supernatural entities are real, and just like ordinary people, they require the services of a private investigator.

Shadows picks up three months after Iron, and concerns the fallout from the end of Iron, as well as a new threat. What starts as a search for an almost-hookup’s missing brother escalates into something bigger, and once again Kate is forced to deal with vampires, werewolves, faeries, and more— when all she really wants to do is relax at home and spend time with Julian, her girlfriend.

Iron & Velvet is the first book in Alexis Hall’s Kate Kane: Paranormal Investigator series of contemporary queer fantasy novels. I was very excited about the opportunity to read this book because I adore Hall’s books, and this was a series I hadn’t had a chance to explore yet. Speaking of which, it should be noted that the Kate Kane books are from Hall’s back catalog, but they are being republished by Carina Press.

As the series title suggests, Kate investigates paranormal crimes, like the death of a werewolf outside of a vampire-owned nightclub. Over the course of the book, Kate encounters a wide variety of otherworldly creatures; some help her, and some hinder her, and then things get all twisty before a huge confrontation with the source of the trouble. END_OF_DOCUMENT_TOKEN_TO_BE_REPLACED 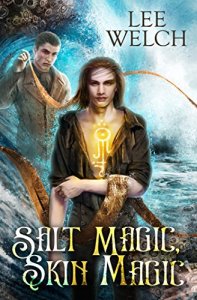 Salt Magic, Skin Magic was written by Lee Welch. This is a Victorian-era m/m romance novel with elements of fantasy and magic. I found out about this book in one of my Facebook groups, and it sounded like the perfect book for me.

Lord Thornby had a pleasant life in London, but after being summoned home by his father to their remote estate, he finds that no matter what he does, he is unable to leave. He is physically trapped on the estate with no hope and no one to help him.

John Blake is a trained magician who arrives at the estate as a favor to a friend. Thornby’s young stepmother believes that she is the victim of dark magic and that Thornby is the one cursing her. Blake is prepared to eliminate the threat, but he realizes that while the house most certainly is cursed, Thornby is as much of a victim as his stepmother. END_OF_DOCUMENT_TOKEN_TO_BE_REPLACED

Rule is the first book in a planned young adult fantast duology by Ellen Goodlett. I enjoy YA, but I don’t read a lot of YA fantasy. However, when the opportunity to read an advanced copy of this book popped up on Netgalley, my interest was piqued.

Rule has all the hallmarks of books from the genre: lush fantasy world, chosen ones, political intrigue, and magic. The TL;DR here is that the sudden death (read: murder) of the heir apparent has made king realize his own impending mortality and the need to secure the future of his line. He has three of his illegitimate children tracked down and brought to the palace. Three girls are around the same age, but they come from vastly different parts of the kingdom. He must have been completing some sort of scorecard or something, extra points for different zones. Anyway, the girls aren’t quite sure what to make of their new circumstances, and they are each harboring a Big Secret- and it appears as though someone else knows about their secrets too. Can they trust each other? Is the fate of the kingdom at stake? END_OF_DOCUMENT_TOKEN_TO_BE_REPLACED

I received a copy of this book from Netgalley/the publishers in exchange for an honest review.

The Crooked Sixpence is the first book in Jennifer Bell’s The Uncommoners series of middle grade books.

Ivy and her brother Seb are the only other ones in the house when their beloved Granma Sylvie is rushed to the hospital; their parents travel for work, and it is up to them to answer questions are ensure that she is taken care of. As if that were not daunting enough for two children, little do they realize that the hospitalization serves as the catalyst for a series of mysterious events. END_OF_DOCUMENT_TOKEN_TO_BE_REPLACED

The Bone Witch is a YA fantasy novel written by Rin Chupeco. It is the first entry in a planned series.

Tea (whose name is not pronounced like the beverage) is a young girl living in a world surrounded by magic. Witches are valued for their power, but when Tea accidentally brings her brother back from the dead, she learns that there is a limit to society’s tolerance for witchcraft.

Bone witches are scorned, but they are also an integral component in keeping the world a safe place. Bone witches are a scarce commodity, so Tea is fortunate to find a mentor who can help her. Most of the book is devoted to Tea undergoing training to understand how to utilize her power. END_OF_DOCUMENT_TOKEN_TO_BE_REPLACED

I received a copy of this book in exchange for an honest review.

The Neverland Wars is a YA fantasy written by Audrey Greathouse. The title gives away a rather big clue about what the story is really about, but the plot starts out like so many other YA novels. Gwen is an average girl in an average town. She goes to high school, interacts with her friends, and she even has a crush on a boy.

But all that changes when Gwen’s little sister Rosemary is kidnapped. Her parents are forced to admit that magic is a very real and very dangerous force. As they worry about when Rose will come home, Gwen comes face-to-face with the kidnapper- the infamous Peter Pan. END_OF_DOCUMENT_TOKEN_TO_BE_REPLACED