This is the second book in the Will Darling series of 1920s queer pulp action/adventure novels. It is absolutely imperative that readers begin with Slippery Creatures, the first book in the series. There won’t be any spoilers for The Sugared Game, but I’ll be discussing some of the events of Slippery Creatures over the course of this review, so please proceed with caution.

END_OF_DOCUMENT_TOKEN_TO_BE_REPLACED

Will went to war at 18, stayed there for the duration, and found hard times upon his return to England. As the story begins, he has just inherited a bookshop from an uncle he barely knew. This ought to be the end of his financial woes, but it turns out to be the beginning of Big Trouble. All sorts of men turn up at the shop asking for the information/papers. Will has no idea what they’re talking about, but these men don’t seem empathetic to Will’s earnest declarations of innocence. They want the papers and they want them now. END_OF_DOCUMENT_TOKEN_TO_BE_REPLACED

All is Fair is a historical fiction YA novel written by Dee Garretson. This book is set during World War I, and while there have been a few titles in recent years, it’s not a very common setting. So right away, my interest was piqued.

When Mina receives a telegram at boarding school, she is initially confused by the odd message contained within. She quickly realizes that the message is actually a code, and returns home. The war has already taken a toll on her family; her brother Crispin is already missing in action, and Mina wants to do whatever she can to help.

She reunites with family friend Lord Andrew and meets Lucas, a handsome American. The young men are participating in flight training at a neighboring manor, but there’s something more going on- something they can’t talk about. Can Mina prove to them that she is capable of helping them? END_OF_DOCUMENT_TOKEN_TO_BE_REPLACED

The Magpie Lord is the first book in KJ Charles’ A Charm of Magpies series of Victorian-era m/m paranormal fantasy romance novels. I have read and enjoyed many of Charles’ books, so when I saw that I could purchase Kindle editions of the trilogy and pair them with audio for a ridiculously low price, I jumped at the opportunity.

Lucien Vaudrey expected to spend the rest of his life in China. But the deaths of his father and older brother mean that he has inherited an earldom. As if returning to a country he hates is not bad enough, Lucien finds himself plagued with something beyond his control.

Stephen Day is a magical practitioner. His family has a long history of acrimony with Lucien’s, but he still agrees to investigate the matter. He does not, however, expect to find Lucien’s home surrounded by malicious magic. Nor does he expect to be attracted to a man that he is supposed to hate. The plot against Lucien runs deeper than either of them expected, and it will consume them both if Stephen fails to find a way to stop it.

END_OF_DOCUMENT_TOKEN_TO_BE_REPLACED

Necropolis is the fourth book in Jordan L. Hawk’s Whyborne & Griffin series. I know I say this in every W&G review, but it’s hard to describe the series. There’s action and adventure, magic and mystery, and m/m romance. All of this is set against a Victorian American background.

This book takes Whyborne and Griffin to Egypt to help their friend Christine, who they believe is in grave danger (pardon the pun). As they assist her at the excavation site, it’s clear that there’s something otherworldly afoot. Once again, Whyborne and Griffin must intercede, lest the threat wreak havoc upon humanity. END_OF_DOCUMENT_TOKEN_TO_BE_REPLACED

Stormhaven is the third book in Jordan L. Hawk’s Whyborne & Griffin series. It’s hard to condense the series into a few descriptors; the books are action/adventure/mystery with some m/m romance, all in an alternate Victorian American setting. I was excited about reading this book because I devoured the first two, and I needed to know what was going to happen next.

Whyborne and Griffin have returned to Widdershins after their ordeal in Threshold, and they are hoping to return to a sense of normalcy after the chaos of the first two books, but alas, this is not meant to be. Whyborne’s coworker Allan is found on the street covered in blood, claiming not to remember anything. Allan is accused of murdering his uncle, but Whyborne harbors suspicions and does not think Allan would be capable of such a heinous crime.

Whyborne and Griffin’s investigation takes them to the Stormhaven Asylum where Allan is being held. Something is definitely “off”; after two previous experiences in dealing with the paranormal, our dynamic duo can sense the hallmarks of anything otherworldly. But is this threat too big for them to handle? END_OF_DOCUMENT_TOKEN_TO_BE_REPLACED

Threshold is the second book in Jordan L. Hawk’s Whyborne & Griffin series. I read this book almost as soon as I finished reading Widdershins, the first book in the series. If I could condense this series into a brief description, I would call it an action adventure supernatural mystery with m/m romance and elements of magic, all set in Victorian-era America.

Whyborne and Griffin have survived the events at the end of Widdershins, and just when they think that their lives are returning to normal, Whyborne’s father summons them to the family manse. There’s something odd happening at one of the family mines, and Mr. Whyborne wants Griffin to investigate. So, along with their friend Dr. Christine Putnam, out delightful duo hop on a train and head south to the town of Threshold. END_OF_DOCUMENT_TOKEN_TO_BE_REPLACED 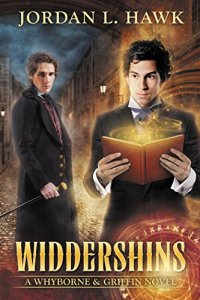 Widdershins is the first book in Jordan L. Hawk’s Whyborne & Griffin series. I’d heard quite a bit of buzz about this series in one of my reading groups. I took the plunge, and I have absolutely no regrets about this decision.

Percival Endicott Whyborne spends his days working in a museum as a comparative philologist, and he is perfectly content with his solitary life. When private detective Griffin Flaherty believes that an ancient book may be the key to his case, Whyborne offers to help with translation. Before he knows it, the shy and withdrawn Whyborne is thrown into the middle of something that defies explanation. Something truly terrifying is afoot, and Whyborne and Griffin must team up if they are going to defeat the evil that has been unleashed. As Whyborne spends more time with Griffin, he finds it more and more difficult to suppress his feelings. He thinks it impossible that Griffin could ever return those feelings. But after seeing some of the things that he has seen, Whyborne should know that anything is possible. END_OF_DOCUMENT_TOKEN_TO_BE_REPLACED