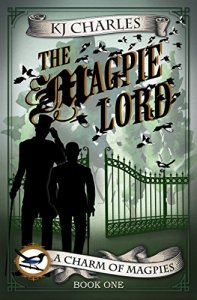 The Magpie Lord is the first book in KJ Charles’ A Charm of Magpies series of Victorian-era m/m paranormal fantasy romance novels. I have read and enjoyed many of Charles’ books, so when I saw that I could purchase Kindle editions of the trilogy and pair them with audio for a ridiculously low price, I jumped at the opportunity.

Lucien Vaudrey expected to spend the rest of his life in China. But the deaths of his father and older brother mean that he has inherited an earldom. As if returning to a country he hates is not bad enough, Lucien finds himself plagued with something beyond his control.

Stephen Day is a magical practitioner. His family has a long history of acrimony with Lucien’s, but he still agrees to investigate the matter. He does not, however, expect to find Lucien’s home surrounded by malicious magic. Nor does he expect to be attracted to a man that he is supposed to hate. The plot against Lucien runs deeper than either of them expected, and it will consume them both if Stephen fails to find a way to stop it.

This book is delightful. Lucien and Stephen have amazing chemistry together, despite their initial mutual dislike, and despite all of their differences. I loved the inclusion of magic into the Victorian world, and the role the paranormal played in the plot development. Lucien and Stephen are supported by well-rounded secondary characters like Merrick the valet/henchman, whose loyalty is the only thing stronger than his sarcasm.

I would recommend The Magpie Lord. This is a wonderful beginning to a thrilling series. This book has the perfect blend of action and magic and wicked humor. I like all of Charles’ books, but this series is among my absolute favorites. My Kindle edition (as well as the Audible companion) included a short story- Interlude with Tattoos– after the main feature. It takes place almost immediately after the events of The Magpie Lord, and wow, just wow, is all I can say about that. As of this writing, I have already finished the series because I have no self control, and now that I’m done, I’m not sure what I’m supposed to be doing with myself now.