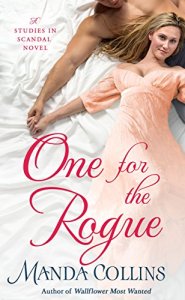 One for the Rogue is the fourth book in Manda Collins’ Regency-era Studies in Scandal series. I have read the other three books in the series, and so I was definitely excited to read this one. Collins dropped some hints about this pairing in the last book, so it made waiting for this book very difficult!

Gemma is the last unmarried young lady living in Beauchamp House, and she is perfectly happy with that arrangement. She is not interested in finding a husband, and she would much rather devote her time to her passion- geology and fossils. She has tangled with Lord Cameron Lisle once already, so she is not particularly thrilled when he takes up residence in a neighboring manor house. But since Gemma’s sister is married to Cam’s brother, there is no reason that the two of them can’t come to some sort of understanding. END_OF_DOCUMENT_TOKEN_TO_BE_REPLACED 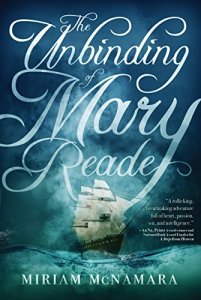 The Unbinding of Mary Reade is a young adult novel written by Miriam McNamara. I was very excited about the opportunity to read this book because I love historical fiction; I don’t read as much Georgian fiction as Regency, but its still an era that I enjoy. In addition to one of my favorite settings, the premise sounded fascinating.

Circumstance has forced Mary Reade to live as a boy named Mark for almost her entire life. As the story begins, Mary’s ship has been attacked by pirates. She chooses to align herself with the pirates, mostly because she sees a girl pirate and imagines being able to go through life as who she is, not who she has to present herself as. END_OF_DOCUMENT_TOKEN_TO_BE_REPLACED

When Life Gives You Lululemons was written by Lauren Weisberger. This is a spinoff to her wildly popular novel, The Devil Wears Prada. I must admit, I didn’t even remember that there was already a sequel to The Devil Wears Prada, but I was excited about this spinoff because I was looking forward to a relatively light and fun “beach read”.

Fans of The Devil Wears Prada will remember Emily as Miranda Priestly’s assistant. She has moved on from that part of her life, and she now works as an image consultant. She’s going through a rough patch with work, and ends up in Greenwich, visiting Miriam- an old friend from summer camp. END_OF_DOCUMENT_TOKEN_TO_BE_REPLACED

Out, Proud, and Prejudiced is a contemporary romance novel by Megan Reddaway. It’s also a gay adaptation of Pride and Prejudice, and as soon as I saw the description, I knew that I had to read this book.

If you’re a fan of Jane Austen’s literary classic, the basic storyline should be familiar to you, with the notable exception of most of the characters being gay men. Bennet Rourke meets Darius Lanniker, and their mutual dislike is almost palpable. They are forced to endure each other because their friends are dating. Misunderstandings occur, mostly due to the machinations of the villainous Wyndham. Can Bennet and Darius see beyond their initial impressions of each other, or are their differences far too great? END_OF_DOCUMENT_TOKEN_TO_BE_REPLACED