They Both Die at the End was written by Adam Silvera. I picked up this book after my oldest daughter stole our copy of another of Silvera’s book.

This book explores the premise of knowing that today will be the day you die. A service called DeathCast calls people to tell them that they are going to die, and a whole industry has developed around this concept. There are apps to find one last friend- or for the more salacious- one last “friend”. There are entertainment complexes that provide people on their Last Day with a variety of experiences.

Mateo and Rufus have never met, but they find each other on their Last Day through the Last Friend app. At first, it doesn’t seem like they have a lot in common beyond the obvious, but they are determined to make the most of their last day. END_OF_DOCUMENT_TOKEN_TO_BE_REPLACED

Looking for Group is a contemporary m/m romance novel written by Alexis Hall. I came across this book on my quest to read all things Hall. I knew it was going to be a bit different from the books in the Spires series or the Arden St. Ives books, but the gaming theme piqued my interest.

Drew is a university student in England who spends a lot of time playing an MMO called Heroes of Legend. After some in-game drama, Drew joins a new guild, and strikes up a rapport with a new guildmate. He thinks that she’s really cool, and he likes chatting with her. He’s developed a bit of a crush, and then he finds out that his new friend is a boy. END_OF_DOCUMENT_TOKEN_TO_BE_REPLACED 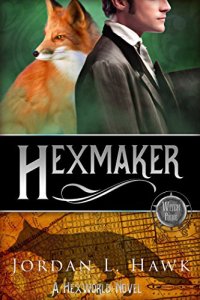 Hexmaker is the second book in Jordan L. Hawk’s Hexworld series of m/m paranormal historical fiction novels. I’m pretty sure I started reading this almost immediately after finishing Hexbreaker– the first book in the series.

Dr. Owen Yates appeared in Hexbreaker, and he’s ready to take on a more central role. Owen comes from one of the wealthiest families in the city, but he enjoys working for the magical police force as a forensic henchman. He first crosses paths with fox shifter Malachi when the latter is implicated in a murder. Malachi didn’t do it, and Owen is probably the only person who can help him prove his innocence. END_OF_DOCUMENT_TOKEN_TO_BE_REPLACED

Pride is a YA novel written by Ibi Zoboi. I was excited about this book because as the title suggests, this is a modern retelling of Pride and Prejudice. Pride and Prejudice variants, in all their delightful forms, are one of my major weaknesses, and I was interested to see Zoboi’s take on the literary classic.

Zuri Benitez loves her Bushwick neighborhood, and isn’t particularly impressed with the changes. She and her sisters have been watching the transformation of the building across the street with interest, and as the story begins, the Darcy family moves in. Zuri’s sister Janae hits it off with Ainsley Darcy, while Zuri clashes with Darius Darcy. END_OF_DOCUMENT_TOKEN_TO_BE_REPLACED

A Case of Possession is the second book in KJ Charles’ A Charm of Magpies series of Victorian-era m/m paranormal romance novels. Charles has become one of my favorite authors, and I’m pretty sure I started this book almost immediately after reading the first book in the series.

The story picks up almost immediately after the events of The Magpie Lord. Having dealt with the threat on Crane’s life, Stephen and Crane return to London. But, as they say, there is no rest for the wicked. Stephen returns to work as a magical police officer, and Crane…. Crane drifts around a little aimlessly. He’s still not happy with the title he’s inherited, and he wants nothing more than to return to China. But now there’s Stephen to consider.

END_OF_DOCUMENT_TOKEN_TO_BE_REPLACED 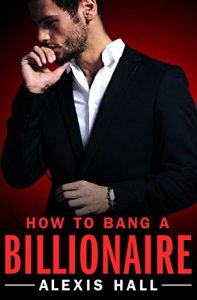 How to Bang a Billionaire was written by Alexis Hall, and it is the first book in the Arden St. Ives series of contemporary m/m romance novels. I initially read this book last December, but since then, I’ve read the book a second time and I’m currently about ¾ of the way through the Audible edition. I think all of Hall’s books are 5 star reads, but this is one of my absolute favorites.

Arden St. Ives is about to graduate from St. Sebastian’s College (Oxford). As the story begins, Arden’s has agreed to participate in a telethon because his best friend has laryngitis. Everyone hangs up almost as soon as he says why he’s calling, but then Arden inadvertently calls Caspian Hart, a reclusive billionaire- and St. Sebastian’s alumnus. Caspian doesn’t hang up on him, and Arden invites Caspian to a fundraising dinner before he realizes exactly who Caspian is. Arden doesn’t expect Caspian to actually show up, but he does. 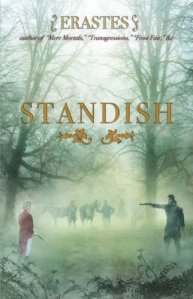 Standish is a historical fiction novel written by Erastes. I’d seen this book mentioned in various places, so when my library network purchased a digital copy, I knew it was finally time to check it out.

The first thing you need to know about Standish is that this is not a conventional m/m historical romance. If that is what you’re expecting, then you’re going to be disappointed.

Ambrose Standish is a sickly young man who lives in the English countryside with his sisters. They spend their days in genteel poverty in the shadow of Standish- the great country house that their grandfather lost in a card game.

Ambrose’s life changes forever when Rafe Goshawk returns from Europe to take up residence at Standish. Rafe is looking for a tutor for his son, and sees hiring Ambrose as a way to apologize for the whole losing-your-birthright thing.

There’s a minor amount of resisting forbidden urges, but eventually Ambrose and Rafe give in to temptation. How lovely! Sounds great! Happily ever after? Not so fast!  END_OF_DOCUMENT_TOKEN_TO_BE_REPLACED

Hexbreaker is the first book in Jordan L. Hawk’s Hexworld series of m/m paranormal historical romance novels. I’ve been a fan of Hawk’s Widdershins books, but after hearing about the Hexworld books in a Facebook group, I knew that I had to read them as well.

Hexbreaker takes place in the 1890s in an alternate version of New York City. Magic plays an important role in everyday life. Hexes are spells that can help or harm people. Witches are aided by familiars- assistants who have the ability to shift into an animal form. A witch needs to bond with a familiar in order to achieve their full potential, but bonding is a serious undertaking that can’t easily be undone.

Tom Halloran is a police officer with several big secrets. He has built a new life for himself, but his newest case is reminiscent of the terrible crime similar to the one that sent him into hiding, and he’s one of the only ones who can stop it from happening again.

Cicero is a cat familiar whose friend has been kidnapped. He’s willing to do whatever it takes to find his friend, including working with Tom, who has revealed that he is a hexbreaker. It’s unclear why somebody with a rare and powerful talent like that would be working as a nonmagical police officer, but they need to work quickly because Cicero’s friend is in grave danger. END_OF_DOCUMENT_TOKEN_TO_BE_REPLACED

For Real is the third book in Alexis Hall’s Spires series of contemporary m/m romance novels. This book was my first experience with Hall, and if you don’t want to read the rest of the review, all you need to know is that I loved this book so much that I spent the rest of the week buying just about everything else that Hall has written.

Laurie has been in a slump since his boyfriend broke up with him. They were together for over a dozen years, but the relationship ended eight years ago, and Laurie is still not over it. He’s been going through the motions of normalcy for years, and he feels extremely pessimistic when his friends drag him to a specialty club.

But something is different- Laurie meets Toby, who is only nineteen years old, but knows that he has dominant tendencies, despite never having been in a relationship that explored that dynamic. END_OF_DOCUMENT_TOKEN_TO_BE_REPLACED

The Time Traveler’s Guide to Modern Romance was written by Madeline J. Reynolds. I’ve been reading a lot of YA lately, so I was excited about the opportunity to read this book.

Elias Caldwell is a young man in the Victorian era who simply doesn’t fit in. He sees no escape from the future his parents have laid out for him, but then his grandfather presents him with an opportunity: a pocket watch that allows him to time travel.

Elias ends up at an American boarding school, where he meets Tyler Forrester. Ty, an aspiring filmmaker, manages to catch Elias appearing out of thin air. The story is too fantastic to be believed, but Ty suspends his disbelief and agrees to help Elias acclimate to the 21st century.

It’s certainly a culture shock, but Elias quickly sees the benefits of modern life. He doesn’t feel as stifled as he did in his own era, and he is pleased to discover that it’s okay to be gay. Even better, he finds friendship and more with Ty.

Ty knows that sharing Elias’ story would almost definitely lead to his big breakthrough in the film world. But what about the ramifications of time travel being real? And what would happen to Elias if everybody knew that he was from over 100 years in the past?

This was a fun story. It unfolds from both Elias and Tyler’s points of view. The plot moves along at a fairly brisk pace, and sometimes it would have been beneficial to slow down for full effect. This is especially noticeable when examining the “relationship” that develops between Elias and Tyler. It’s almost instantaneous, and I would have loved to see the tension drawn out a little more.

I would recommend The Time Traveler’s Guide to Modern Romance. This will definitely appeal to the target demographic. Readers should know explanations behind the “science” of time travel are fairly light, but there’s a nice balance between the other elements of the plot. Overall, this is a fairly light book and a quick read. I’m looking forward to reading more from Reynolds in the future.