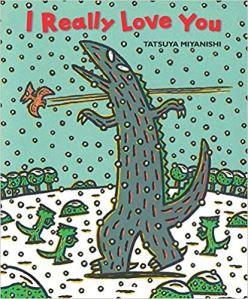 I Really Love You is the latest book in Tatsuya Miyanishi’s Tyrannosaurus series. Over the years, my family has received the opportunity to read advanced copies of several of these Tyrannosaurus books, so even though my girls are growing out of picture books, it was still nice to revisit the series.

In this book, we are told that dinosaurs in the north speak a different language from dinosaurs in the south. Tyrannosaurus is feeling hungry, and a Tapejara agrees to help him find food. They both speak the same language, so Tyrannosaurus trusts his new friend- but it’s a trick! Luckily, the Tyrannosaurus escapes, and he encounters some Homalocephales. They don’t speak the same language, and the Tyrannosaurus thinks about eating them- after all, he’s still very hungry. But he ends up befriending them, and accepts their gifts of fish, clam, and berries. Despite their differences, they are able to strike up a meaningful friendship.    END_OF_DOCUMENT_TOKEN_TO_BE_REPLACED 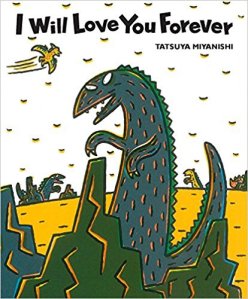 I Will Love You Forever is a picture book in Tatsuya Miyanishi’s Tyrannosaurus series. My girls have enjoyed reading the other books in this series, so I was looking forward to sharing it with them.

The story begins with a female Maiasaura finding an egg in the forest. She brings it home to her own egg, and sits on both eggs until they hatch. She is a little alarmed when the egg she found hatches into a Tyrannosaur, but she is determined to raise both babies as her own. She calls the baby Maiasaura “Light” and she calls the baby Tyrannosaur “Heart”. END_OF_DOCUMENT_TOKEN_TO_BE_REPLACED

My girls and I have been enjoying the Tyrannosaurus books. This is a series of picture book written and illustrated by Tatsuya Miyanishi. The books are very popular in Japan, and are now being published here in the United States. They have been releasing a new Tyrannosaurus book every six months or so.

I Want That Love is the third Tyrannosaurus book that they have published. In this story, a mean Tyrannosaurus goes about terrorizing people simply because no one can stop him. He receives his comeuppance when he is an old dinosaur, and is attacked by a masiakasaurus. After that, the Tyrannosaurus is still not ready to mend his wicked ways, but then he is helped by a group of baby triceratops. Only then, does he truly learn that kindness is more important than strength and power. END_OF_DOCUMENT_TOKEN_TO_BE_REPLACED

I was very excited about the opportunity to read You Are My Best Friend because my daughters and I had already read Tatsuya Miyanishi’s other book featuring the Tyrannosaurus, You Look Yummy. These Tyrannosaurus books are part of a popular series in Japan, and they are now being published in the United States.

I am a big fan of picture books. I still have favorites from my own childhood, and I have added some new favorites that I have discovered through my reading adventures with my daughters. I was very excited about the opportunity to read You Look Yummy with my daughters, especially after I found out that this is the first entry in an extremely popular series in Japan, China, Korea, and France. END_OF_DOCUMENT_TOKEN_TO_BE_REPLACED