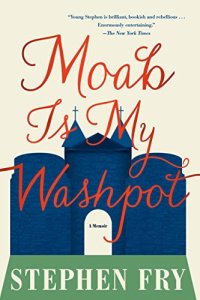 Moab Is My Washpot is actor Stephen Fry’s memoir/autobiography. The title of this book is derived from a quote in a P.G Wodehouse book, which in turn is derived from a Biblical reference. I was already familiar with the fictionalized version of his turbulent adolescence in his novel The Liar, but I only discovered this memoir in the last couple of weeks.

Stephen Fry has made an illustrious career for himself, one that spans nearly four decades. This memoir, however, is limited to his first 18 years. Stephen spent most of his childhood at boarding school, where he experienced all sorts of Dickensian horrors. When things go awry at school, Stephen revolts at the plan to keep his life on track, and embarks on a crime spree. Despite his attempts to sabotage himself, Stephen manages to find a place at Cambridge. This memoir does not cover those years, but of course, fans will know that this is where Fry will fall in with lifelong friends like Hugh Laurie and Emma Thompson. END_OF_DOCUMENT_TOKEN_TO_BE_REPLACED 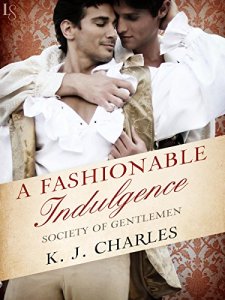 A Fashionable Indulgence is the first book in K.J Charles’ A Society of Gentlemen series of Regency-era m/m historical romance novels. I ended up reading the series in reverse order, so I was excited about finally reading the beginning.

Harry Vane spent his childhood in hiding because his parents were political agitators who had to flee the country. He is working in a printer’s shop when his grandfather tracks him down. Harry is introduced to his cousin Richard, and plans are made to turn Harry into the gentleman he was born to be.

Richard turns over responsibility for this miraculous transformation to his friend Julius, so Harry and Julius retire to Richard’s country house. Julius is an expert in the art of being a gentleman, but considering that Harry knows absolutely nothing, Julius has his work cut out for him! END_OF_DOCUMENT_TOKEN_TO_BE_REPLACED 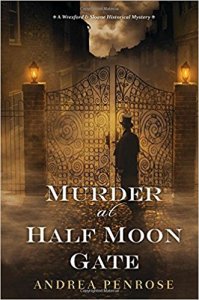 Murder at Half Moon Gate is the second book in Andrea Penrose’s Wrexford & Sloane Regency-era historical mystery series. I enjoyed reading the first book in the series, and I was looking forward to happen next in the series.

The Earl of Wrexford stumbles upon a body in an alley, and he realizes immediately that this is not a random incident of a hapless soul wandering into a dangerous neighborhood. Wrex doesn’t intend to involve himself with another mystery so soon after the last incident, but after meeting with the man’s widow, he feels that it is his duty to look into what led up to the victim’s brutal death.

Wrex knows that he isn’t going to be able to piece the details together without the insight of his new friend Mrs. Charlotte Sloane. Together, they pore over the clues and attempt to rule out the various suspects. But someone was killed for the information at the crux of this case, and the perpetrators would certainly be willing to kill again. END_OF_DOCUMENT_TOKEN_TO_BE_REPLACED 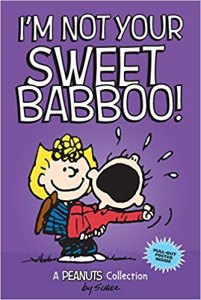 I’m Not Your Sweet Babboo is a collection of Peanuts cartoons by the late Charles Schulz. I was very excited about the opportunity to read this book because my oldest daughter is a big fan of Peanuts. Needless to say, she was very excited when I told her that I had a Peanuts book for her to read!

Fans of Peanuts will know that “sweet babboo” was a term of endearment that Sally Brown used with her beloved Linus. Interestingly enough, while there was a storyline involving Sally and Linus going to a farm on a school, most of the collection focuses on other storylines. We are treated to Snoopy’s feud with the cat next door, Peppermint Patty’s school troubles, Charlie Brown running away, and Snoopy playing tennis with Molly Volley.

These storylines are unrelated, but the compilers of this collection did a good job with the segues, so nothing seems out-of-place with the transitions. There’s a nice flow. END_OF_DOCUMENT_TOKEN_TO_BE_REPLACED 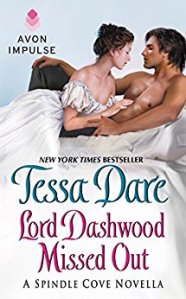 Lord Dashwood Missed Out is a novella written by Tessa Dare. It is book 4.5 in Dare’s Spindle Cove series of Regency-era historical romance novels. I’ve only read the last book in this series, but this novella worked well because it is only tangentially related to the Spindle Cove books.

Nora Browning is traveling to Spindle Cove to participate in a dramatic reading of her writing. But when she arrives at the inn before her last leg of the journey, she discovers that the coach has already left. And if things couldn’t get any worse, she runs into the last man she expected to see- Lord Dashwood, who grew up on a neighboring estate.

This is exceptionally problematic because Nora’s famous essay is entitled Lord Ashwood Missed Out. Needless to say, Dash has questions about this allegedly fictional essay, and he agrees to transport Nora to her destination. And then if things aren’t awkward enough, the carriage breaks down, and Dash and Nora are forced to take refuge in an abandoned cabin. Will Dash ever receive an adequate explanation for what he missed out on all those years ago? END_OF_DOCUMENT_TOKEN_TO_BE_REPLACED 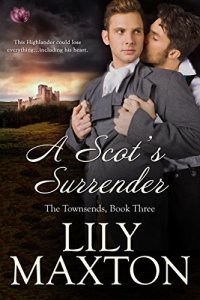 A Scot’s Surrender is the third book in Lily Maxton’s Regency-era The Townsends series of historical romance novels. I haven’t read of her books before, but I’m always interested in discovering new authors. I’ve also been reading quite a bit of m/m pairings, so that was another factor that piqued my interest.

Anyway, Robert has been left in charge of the estate, and he has moved the land steward moved into the house because his cottage burned down. Robert and Ian don’t have anything in common; Robert feels like Ian doesn’t really like him (true) and this bothers him because he wants people to like him. Ian is a humble Highlander, who just wants to do his job, and Robert’s attempts at friendliness are getting in the way of that. END_OF_DOCUMENT_TOKEN_TO_BE_REPLACED 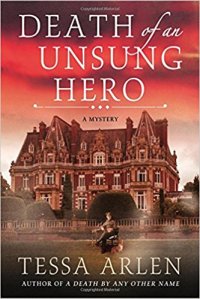 Death of an Unsung Hero is a historical mystery by Tessa Arlen. It is the fourth book in her WWI era Lady Montfort mystery series. I have read the first book in the series, so I was excited about the opportunity to read this latest addition.

WWI has brought some changes to the Montforts- their manor house now serves as a rehabilitation center for officers affected by “neurasthenia”, more commonly known as shell-shock. Everyone seems to be making wonderful progress, but then one of the officers is found dead in the garden and all signs point to murder.

There are many in the village who think poorly of the men staying at the house; they believe they are cowards who are shirking their duty, and that diseases of the “nerves” don’t exist. Could one of them have killed the officer? Or perhaps one of the other men staying at the house imagined that he was back in the trenches and lashed out, with deadly consequences. It is up to Lady Montfort and her housekeeper Mrs. Jackson to figure out what happened before the medical board closes down the manor house. END_OF_DOCUMENT_TOKEN_TO_BE_REPLACED 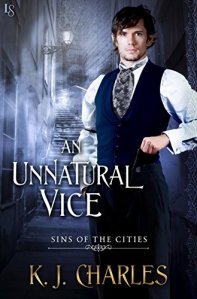 An Unnatural Vice is the second book in K.J. Charles’ Sins of the Cities series of Victorian-era m/m historical romance novels. I’ve read several of Charles’ other books, but this is the first book that I’ve read from this series.

Nathaniel is a journalist, and initially, he visits spiritual medium Justin with the intent of exposing him. Instead, Nathaniel is shocked with Justin is able to tell him things that he couldn’t possibly know. Nathaniel walks away frustrated, still convinced that it’s trickery, but now knowing how to prove it. He hopes that this is the last that he will see of the sham spiritualist, but then he learns that Justin may have some information about a case that he and his friends have been investigating.

Justin is quite different from Nathaniel. He grew up in abject poverty, and he justifies his occupation by believing that he is giving people what they want. And besides, it pays the bills and keeps him and his assistants fed. He finds Nathaniel arrogant, but there is a mutual attraction that neither of them can deny. END_OF_DOCUMENT_TOKEN_TO_BE_REPLACED 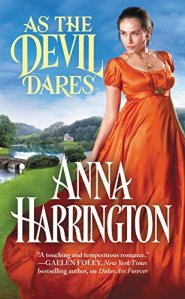 As The Devil Dares is the third book in Anna Harrington’s Capturing the Carlisles Regency-era series of historical romance novels. I was excited about the opportunity to read/review this book because I enjoyed the other two books in this series.

Robert Carlisle is the last of the three wild Carlisle brothers. He doesn’t have any plans to marry, but that all changes when he meets Mariah Winslow. Mariah’s father is a prosperous shipping merchant, and he always hoped that his two daughters would have the opportunity to mingle with Proper Society. As the son of a duke, Robert can provide them with introductions- but what he really wants is the opportunity to become a partner in Winslow’s business. This comes as a surprise to Miranda who always assumed that she would be a partner in her father’s business one day, and she resents this interloper, even if he is devilishly handsome! END_OF_DOCUMENT_TOKEN_TO_BE_REPLACED 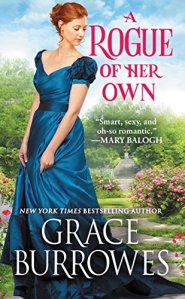 A Rogue of Her Own was written by Grace Burrowes. It’s the fourth book in her Regency-era Windham Brides series. I was very excited about the opportunity to read this book; I haven’t had a chance to read the first book in the series, but I did enjoy books two and three, so I was looking forward to this next installment in the series.

There was a hint in No Other Duke Will Do that Charlotte and Sherbourne were going to be paired up, and I remember saying that Burrowes had her work cut out for her because Sherbourne was quite troublesome. Sherbourne’s redemption is certainly an interesting process, and he makes a rather unique romantic lead. He doesn’t have a title, nor does he want one. He has spent his life making money, and is motivated by any opportunity to spite the aristocrats who have shunned him since childhood.     END_OF_DOCUMENT_TOKEN_TO_BE_REPLACED