The Wonderling is a middle grade novel written and illustrated by Mira Bartok. I was very excited about the opportunity to read this book because I have three girls in the middle grade range, and I knew this book would appeal to them.

Arthur is a young fox groundling (a sort of anthropomorphic animal). He lives in an orphanage with other groundlings, ruled by the cruel Miss Carbunkle, who metes out punishments to maintain order and has placed a permanent ban on music or anything happy. Arthur meanders through his miserable existence, but that changes when he meets Trinket. It is Trinket who gives him his name- before that, doesn’t even have a name and is referred to as Thirteen. Trinket becomes Arthur’s first friend, and she tells him wonderful stories about the world outside the Home. Arthur is terrified by change, but with Trinket’s coaxing, he agrees to escape with her. This proves to be the beginning of an amazing adventure, as Arthur tries to discover his origins. END_OF_DOCUMENT_TOKEN_TO_BE_REPLACED 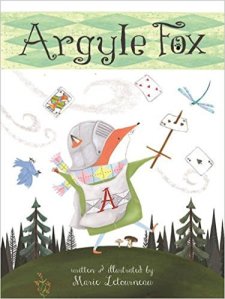 Argyle Fox is a picture book written and illustrated by Marie Letourneau. The titular little fox wants nothing more than to play outside, but the wind ruins his plans. Animal friends try to warn him about the wind, but he ignores their advice- and then feels frustrated that his games are spoiled. Isn’t there anything that Argyle can do on a windy day? END_OF_DOCUMENT_TOKEN_TO_BE_REPLACED

Last week, one of my first grade twins came home with two books. Her sweet classmate had noticed that she liked foxes, so he brought two books about foxes from his house for her to borrow.

Fox and Crow Are Not Friends is a level 3 “Step into Reading” book written by Melissa Wiley and illustrated by Sebastien Braun.

This story begins with Aesop’s fable about the fox and the crow, wherein a fox tricks a crow into giving up the cheese in her mouth by praising her beautiful singing. The vain crow cannot resist, but when she opens her mouth to sing, she loses her cheese. That is where the fable ends, but our story continues. The crow is annoyed about losing her cheese, so she seeks revenge. The fox is not happy about this development and insists, “No one outfoxes a fox!” There is something that the fox and the crow have not considered: who does all the cheese they keep taking belong to, and how will they react when they find out who has been taking the cheese? END_OF_DOCUMENT_TOKEN_TO_BE_REPLACED 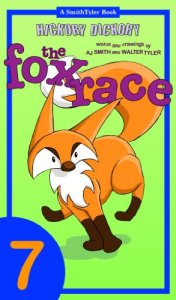 One of my twins loves foxes. She is a rather lucky girl- foxes seem to be a popular animal, and so there are many different children’s clothing stores that have released fox items. We also have fox books, fox stuffed animals, and much more.

There is a dear sweet boy in her first grade class. This boy was also in her kindergarten class. He noticed that my daughter liked foxes, and he asked his mother if he could bring some of his fox books to school for her to borrow. She was very excited when she came home, and we have been reading these two fox books.

One of the books is Hickory Dickory: The Fox Race written by AJ Smith and Walter Tyler. I am not familiar with the Hickory Dickory series, and I’m so pleased to have discovered it. The premise of this book is simple: a fox likes to race, and he is faster than any other animal. He embarks on a trip around the world, and beats a variety of animals in their natural habitat. Will he be satisfied once he has raced (and beaten) animals on all seven continents? END_OF_DOCUMENT_TOKEN_TO_BE_REPLACED

A few years ago, my mother went to France for a vacation. She brought back presents for my girls. Among other trinkets, she gave them bowls with a picture of The Little Prince and the quote “Mais les yeux sont aveugles. Il faut chercher avec le Coeur.” This translates to “But the eyes are blind. You must look with your heart.”

The girls love their bowls, and about a month ago, my oldest girl came out of Kumon with a copy of The Little Prince and was very excited that she had found the book about the boy on the bowl. This reminded me that The Little Prince had been an Audible Daily Deal that I had purchased, and I asked the girls if they wanted to listen to The Little Prince. Everyone said they did, so we listened to The Little Prince as we drove back and forth from our activities. END_OF_DOCUMENT_TOKEN_TO_BE_REPLACED

One of my twins is absolutely enchanted with foxes. This all began when she received a stuffed fox for her birthday- a plush toy, not a taxidermy fox. This spawned a deep love for all things fox. Her new obsession with foxes was well-timed because most major children’s clothing stores had fox themed clothing this fall/winter. My girl wears fox clothing, reads fox books, and sleeps with several different stuffed foxes.

So, needless to say, when she saw the Sewing Bee My Fabulous Fox Sewing Kit at her school’s Scholastic Book Fair, she squealed with joy. I was happy to buy it for her, and that weekend, we worked together to assemble her fabulous fox purse. END_OF_DOCUMENT_TOKEN_TO_BE_REPLACED