Tell Me a Mitzi is a picture book written by Lore Segal and illustrated by Harriet Pincus. I was very excited about the opportunity to share this book with my girls because this was a book I remembered from my own childhood. We loved this book so much that we even named one of our cats Mitzi, and she was my mother’s favorite cat of all time. I still have my copy of this book on cassette, probably a relic from a Scholastic book flier.

Mitzi is a young girl living in New York City, and this book is made up of three short stories about the titular girl and her family. They are fairly short stories that start out like everyday occurrences, but there is a little twist at the end of each story. END_OF_DOCUMENT_TOKEN_TO_BE_REPLACED

The Secret Diaries of Miss Miranda Cheever is a historical romance novel written by Julia Quinn. It’s the first book in her Regency-era Bevelstoke trilogy. I did not have a chance to read this book when it was originally published in 2009, so I was very excited when it was available as part of an Audible sale.

Miranda Cheever is an only child, and she has formed a friendship with Olivia and Winston, the Bevelstoke twins who live nearby. Once day, her friends’ older brother Turner escorts her home. He is kind to her, and encourages her by suggesting that she keep a diary to look back on when she is grown up.

The main story takes place about nine years after the prologue. Miranda is now around twenty years old, and she reconnects with Turner. She is preparing for a Season in London, and to put things mildly, he is not in a good place emotionally. He realizes quite suddenly that Miranda is no longer the gawky girl she used to be. Turner has no interest in marrying again, but he can’t stop thinking about Miranda. Oh, and Olivia is intent on arranging a match between Miranda and Winston. END_OF_DOCUMENT_TOKEN_TO_BE_REPLACED 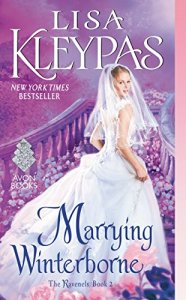 Marrying Winterborne is a historical romance novel by Lisa Kleypas. It’s the second book in her Ravenels series, and I recently listened to the audiobook via the Audible app. I had picked up the first two books in the series during a sale, and I started listening to this book almost immediately after finishing Cold-Hearted Rake.

Lady Helen has been sheltered for most of her life, rarely venturing away from the manor house in which she was raised. She has not encountered very many eligible young men, and finds Rhys Winterborne absolutely charming. Their courtship actually began in Cold-Hearted Rake, and I was very interested in seeing what was going to happen to Helen and Rhys.

As the owner of the largest department store in London, Rhys Winterborne might be one of the wealthiest men in England, but his working-class origins make him wholly unsuitable for the daughter of an earl. Rhys never imagined that he would ever fall in love, but he can’t stop thinking of Lady Helen. END_OF_DOCUMENT_TOKEN_TO_BE_REPLACED 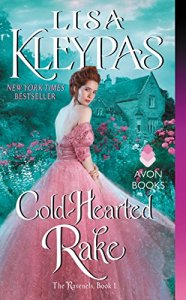 I recently listened to the Audible edition of Cold-Hearted Rake by Lisa Kleypas. I have enjoyed many of Kleypas’ historical romance novels, and when this book popped up as part of an Audible sale, I took the opportunity to catch up on her return to the genre.

Devon Ravenel never expected to inherit his cousin’s title, and he journeys to his new manor house with the intent to sell the estate in parcels to pay off debts. However, upon his arrival, Devon becomes reacquainted with his three cousins, whose future is dependent on him now that their brother is dead.

The household also includes Kathleen, who had recently married the Earl of Trenear and now finds herself widowed and alone. She sees Devon’s arrival as an annoying interference, and she is especially disgusted by his plans to sell off the estate. Can she persuade him to change his mind?

This is a wonderful example of the enemies to friends trope. I enjoyed watching Devon and Kathleen’s relationship develop over the course of the novel. This was definitely not a case of insta-love. They each have qualms about commitment that they need to overcome as they consider what they mean to each other.

Another thing that I liked about this book is the inclusion of top-notch secondary plotlines. It is not terribly common for books in the genre to have narrative from the point of view of a secondary character, but it worked well here. It also set up the second book in the series very nicely.

I would absolutely recommend Cold-Hearted Rake. Devon and Kathleen are both likeable, and they have good chemistry. The secondary characters are well rounded as well; I especially enjoyed the twins. As soon as this book ended, I was ready to start the next book in the series! I am looking forward to reading the rest of the Ravenels series in the future!

The Silent Duke is the fourth book in Jess Michaels’ 1797 Club series of historical romance novels. I have not read any of the previous books in this series, but I belong to a group for fans of romance novels, and this book came up in response to a query about atypical heroes. Needless to say, I was very excited about the opportunity to read this book.

Ewan is the Duke of Donburrow, but his ascension to the dukedom was somewhat controversial. He is mute, and when he was a child, his father attempted to have him declared incompetent and relegated to an asylum. Ewan was rescued by relatives, who protected him from the machinations of his immediate family. Ewan inherited the title when his father passed away, despite the protests from his younger brothers.

As the story begins, Charlotte arrives at Ewan’s home for Christmas. She is a childhood friend who always advocated for him, even when she was a small girl. She helped him develop a means of communication by using his hands- Regency Sign Language, if you will. She is one of many people who are supposed to fill the house for the holiday. However, bad weather and subsequent flooding prevent everyone else from reaching the house. This means that aside from the household staff, Charlotte and Ewan are alone in the house. Charlotte finally has the opportunity to tell Ewan that she has always loved him, and wants their relationship to move from friendship to something even more special. END_OF_DOCUMENT_TOKEN_TO_BE_REPLACED

The Ghost of Christmas Past is the 17th book in Rhys Bowen’s Molly Murphy mystery series. I am a big fan of Rhys Bowen, and I have read many (although not all) of the Molly Murphy books. I was definitely excited about the opportunity to read this book.

Molly is trying to recover from some sad news that she received at the end of the last book. She and her husband Daniel think that spending Christmas at a swanky Westchester mansion is just the thing they need to lift their spirits. Upon arrival, they learn that the family suffered a tragic loss when their daughter disappeared ten years ago. There was never any ransom note, nor was any trace of the girl ever discovered. Naturally, Molly wants to investigate, but there are strange things afoot, and strange occurrences too. END_OF_DOCUMENT_TOKEN_TO_BE_REPLACED 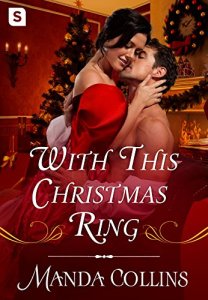 With This Christmas Ring is a historical romance novella written by Manda Collins. I’m a big fan of her Studies in Scandal series, so I was very excited about the opportunity to read this book.

Merry’s friend Charlotte died following childbirth, and Merry made a solemn promise to care for the tiny baby. Charlotte, who insisted that she was married, had been thrown out of her home when her husband failed to materialize. Now, it is up to Merry to track down the errant rogue, but doing so means that she must go back to a place she never thought she would. Five years ago, she broke off an engagement with Alex, the Viscount Wrotham, but given that his cousin is Charlotte’s alleged husband, Merry is left with little choice. Likewise, Alex is puzzled by Merry’s sudden reappearance in his life, and is determined not to let her slip away again.

END_OF_DOCUMENT_TOKEN_TO_BE_REPLACED

No Other Duke Will Do is the third book in Grace Burrowes’ Windham Brides series of historical romance novels. This is only the second book of hers that I have read, but she is quickly becoming one of my favorites.

Julian St. David is the Duke of Haverford. The family seat is in Wales, where he is quite content to remain. However, the estate has fallen into financial ruin, mostly because his predecessors cared more about spending money on rare books than maintaining the estate. Despite this- or perhaps because of this- Julian’s sister suggests throwing a lavish house party so that Julian can find a wife.

Elizabeth Windham is not an heiress, nor is she particularly looking for a husband, but she finds herself drawn to Julian. Likewise, Julian realizes that there is no one he would rather spend time with. But is attraction and infatuation enough to sustain them beyond the length of the house party? END_OF_DOCUMENT_TOKEN_TO_BE_REPLACED

The Bride Who Got Lucky is the second book in Janna MacGregor’s Cavensham Heiresses series of Regency-era historical romances. I thoroughly enjoyed the first book in the series-The Bad Luck Bride- so I was already looking forward to reading this book even without knowing anything about it.

Nick and Emma were secondary characters in The Bad Luck Bride, so I became even more excited when I found out that they had been paired together for The Bride Who Got Lucky.

Nick and Emma are both very strong-willed, and they are much more similar than they realize. They both want to do things on their own, without relying on their families. This manifests for Nick in his business acumen; he has been estranged from his father since his Eton days, and he has amassed a fortune through hard work and shrewd investing. Likewise, Emma wants more out of life than an aristocratic marriage and children. She wants to open a bank for women who need financial assistance to get out dangerous situations. END_OF_DOCUMENT_TOKEN_TO_BE_REPLACED