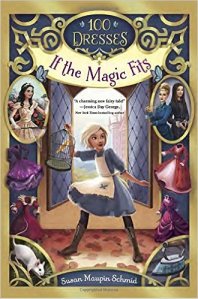 I have a nine-year-old daughter, so I am always excited about reading middle grade books. We often read the books I receive together. She loves reading, and her feedback is invaluable.

If The Magic Fits was written by Susan Maupin Schmid. This is the story of Darling Dimple. I just have to say that this is such a delightful name for a character; it fits Darling so well. Darling is a young girl who works in the kitchen of a castle. She isn’t doing anything glamorous like baking- she’s a scrubber. But that changes when Darling gets the chance to become a presser, working with Princess Mariposa’s linens. END_OF_DOCUMENT_TOKEN_TO_BE_REPLACED

Over the summer, my girls and I had the opportunity to meet Mo Willems at a book signing. We were surprised to find out that he was going to give a presentation before signing everybody’s books. During that presentation, he read Nanette’s Baguette. This was a big treat for us because the book had not even been released yet. The entire room full of children and their parents loved the story, and the experience made the wait for the book even harder!

I had already ordered our copy on Amazon a month before meeting Mr. Willems, and today the book arrived at our house.

Nanette’s Baguette is the story of a little girl named Nanette whose mother sends her to buy a baguette from the bakery. At first, Nanette sticks to the plan, but things go awry quickly. Can she resist the temptation to eat the baguette? Will a sudden rainstorm ruin her day? END_OF_DOCUMENT_TOKEN_TO_BE_REPLACED

These Dark Wings is a middle grade novel by John Owen Theobald. This WWII story follows young Anna Cooper, who moves into the Tower of London after her mother is killed during the Blitz. Her uncle is the Ravenmaster at the Tower, and helping him care for the ravens gives Anna a purpose as she adjusts to her new life.   As the German bombardment continues relentlessly, Anna becomes increasingly preoccupied with the myth that the fate of England is tied to the ravens remaining at the Tower; if the ravens leave, then England will fall. END_OF_DOCUMENT_TOKEN_TO_BE_REPLACED

I have read a few of Tasha Alexander’s Lady Emily mysteries, so I was looking forward to reading A Terrible Beauty.

As the story begins, Emily and her husband Colin are preparing for a trip to Greece, where Emily has a villa that she inherited from her first husband. Philip has been dead for over ten years, but Emily suddenly finds signs that remind her of him. She even thinks that she sees him at one point, but that’s impossible- isn’t it?

Emily and Colin are joined on their trip by their friends Margaret and Jeremy, the latter of which is desperately in need of respite after the events of the previous book. They plan to while away their days in a leisurely fashion, while taking in all that the cradle of civilization has to offer. Upon their arrival at the villa, they are surprised with the revelation that the Viscount Ashton is there. It seems impossible, but this strange man appears to be Ashton- he looks vaguely like Ashton (although ten years have elapsed), and he repeats stories that no one else would know. Colin was one of Ashton’s closest friends, so this is quite an awkward situation for everyone involved. It should be noted, however, that Colin and Emily did not marry until three years after Ashton’s death. They had every expectation that he was truly dead. END_OF_DOCUMENT_TOKEN_TO_BE_REPLACED

I have read several of the books in Susan Elia MacNeal’s Maggie Hope series, and I was looking forward to reading The Queen’s Accomplice, which is the newest entry.

For those of you unfamiliar with Maggie Hope, she is a young woman living in England during WWII. She’s very clever, and this leads to government positions working with powerful people, like Winston Churchill.

As the book begins, Maggie has returned from her American sojourn, and is working with British Intelligence translating the encoded messages the office receives from agents working in Occupied France. Some of her superiors are less than thrilled about female agents, and they ignore Maggie’s concerns that one of the female agents may have been captured.

END_OF_DOCUMENT_TOKEN_TO_BE_REPLACED

Narwhal: Unicorn of the Sea is a graphic novel written and illustrated by Ben Clanton. It is intended for readers of all ages, and will hold special appeal for children in the early years of elementary school.

This novel is broken up into three short stories featuring a charismatic narwhal and his jellyfish friend. In the first story, the friends meet for the first time and try to figure out if they are real or imaginary. The second story contains some important lessons about friendship when Jellyfish feels left out after Narwhal recruits other animals as members of his new pod. Finally, the third story demonstrates the power of imagination when Narwhal and Jellyfish peruse a book with no words or pictures. END_OF_DOCUMENT_TOKEN_TO_BE_REPLACED