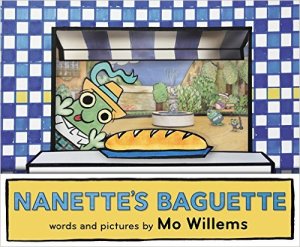 Over the summer, my girls and I had the opportunity to meet Mo Willems at a book signing. We were surprised to find out that he was going to give a presentation before signing everybody’s books. During that presentation, he read Nanette’s Baguette. This was a big treat for us because the book had not even been released yet. The entire room full of children and their parents loved the story, and the experience made the wait for the book even harder!

I had already ordered our copy on Amazon a month before meeting Mr. Willems, and today the book arrived at our house.

Nanette’s Baguette is the story of a little girl named Nanette whose mother sends her to buy a baguette from the bakery. At first, Nanette sticks to the plan, but things go awry quickly. Can she resist the temptation to eat the baguette? Will a sudden rainstorm ruin her day?

The illustrations are just wonderful. They’re everything we have come to expect from a Mo Willems book. They are slightly more detailed than the Elephant and Piggie books, but there is still an emphasis on body language and facial expressions. Half of the humor is in watching Nanette wrestle with her self-control and she wants nothing more than to bite into the baguette with a satisfying KRACK.

The best thing about Nanette’s Baguette is that the plot unfolds through the magic of rhyme:

to get the baguette!

As the rhyming continued, my girls began to giggle. I think you will be hard-pressed not to smile at this silly story of a girl and her love of bread. Nanette experiences a full range of emotions on her baguette getting adventure, much to the amusement of my three girls.

I would absolutely recommend Nanette’s Baguette. This story will appeal to preschoolers who will love hearing it read out loud all the way up to elementary school children who can read it independently. Don’t forget to look for the Pigeon hidden somewhere in the book. It took us awhile to find him, but here’s definitely there!