Death of a Dishonorable Gentleman is the first book in Tessa Arlen’s Lady Montfort mystery series.

Lady Montfort loves planning her annual summer party. She is happy to have her son home from Oxford, as well as his childhood friends. However, things take a nasty turn when her nephew Teddy is found dead- gruesomely murdered, it seems. Lady Montfort saw her son arguing with Teddy and even shoving him. She knows that her son is not capable of such a heinous crime, but she is also afraid that the investigation will lead back to him. END_OF_DOCUMENT_TOKEN_TO_BE_REPLACED

When the Scoundrel Sins is the second book in Anna Harrington’s Capturing the Carlisles series of Regency-era historical romances. I was very excited about the opportunity to read this book because I enjoyed reading the first book in the series.

Six years ago, Quinn and Annabelle were discovered in a semi-compromising position. This incident proved to be her social ruination, but she has occupied herself over the subsequent years by working hard to improve the estate that she lives on. If she marries before her 25th birthday, then the estate will be hers outright- not her husband’s.

Quinn and his brother Robert are summoned to the estate to help oversee the process of finding a suitor for Annabelle. Quinn realizes that Annabelle is just as beautiful as she was the last time he kissed her, and that this is going to be a much more difficult project than he anticipated. END_OF_DOCUMENT_TOKEN_TO_BE_REPLACED 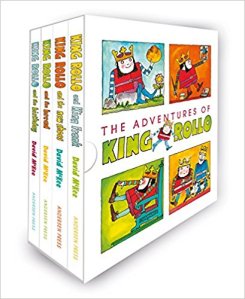 I remember watching King Rollo on Nickelodeon back in the 1980s. We also had a couple of the books. It seems like a lot of people don’t remember it, so I was very excited when I saw a set of King Rollo books on Amazon.

The Adventures of King Rollo is a set of four little hardcover books written and illustrated by David McKee. They come packaged nicely in a sturdy cardboard slipcase.

King Rollo and the Bread shows King Rollo trying to improve upon a farmer’s simple meal of bread by having his Magician change the bread into many different foods. The moral of this story is that simple is sometimes best. END_OF_DOCUMENT_TOKEN_TO_BE_REPLACED 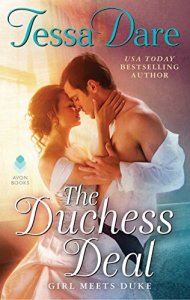 The Duchess Deal is the first book in Tessa Dare’s Girl Meets Duke series. I’ve been looking forward to this book for several months, and I was so excited that it was finally here that I read the whole thing in a day.

Emma was a vicar’s daughter, but circumstances have forced her to seek work as a seamstress. And when the Duke of Ashbury’s wedding is canceled, this leaves Emma is a precarious position- she has designed the dress, and now she will not be receiving payment for her effort. So she does what any rational person would do- she shows up at Ashbury’s London home wearing the wedding dress.

Ash, as he was called by the friends he once had, was severely injured in the Napoleonic Wars. He is scarred and bitter, but he also needs an heir. So he does what any rational aristocrat would do in his position- he proposes marriage to the angry young woman wearing a wedding dress. END_OF_DOCUMENT_TOKEN_TO_BE_REPLACED

The One That Got Away was written by Melissa Pimentel. This is a cute story that bills itself as a modern version of Jane Austen’s Persuasion. I don’t usually read a great deal of contemporary adult fiction, and I must admit that the Austen connection is what drew me to this book.

Ruby lives and works in NYC, and has dedicated herself wholeheartedly to her career in advertising. As the story begins, she is preparing to travel to England for her little sister’s dream wedding. There’s just one problem- Ruby’s ex-boyfriend is going to be there as well because he’s best friends with the groom. END_OF_DOCUMENT_TOKEN_TO_BE_REPLACED 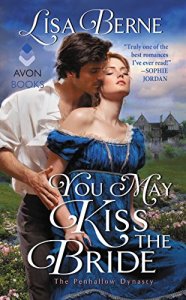 I picked up You May Kiss the Bride when the Kindle edition was on sale., and I added the audio as well. This is the first book in Lisa Berne’s Penhallow Dynasty series of Regency-set romance novels.

Gabriel Penhallow is supposed to marry the perfect girl from the right family, a young woman well-versed in the nuances of Proper Society. And he has every intention of proposing to Cecily; he doesn’t know her at all, but his grandmother says that she is the perfect Penhallow bride. But Gabriel finds himself kissing Livia Stuart in the garden, and when they are discovered, he insists that he will marry Livia. END_OF_DOCUMENT_TOKEN_TO_BE_REPLACED

I preordered this book back in March, so it was very exciting when the Amazon delivery van pulled up in front of my house. My three girls wanted to read this book immediately, and I was happy to oblige.

Here Comes Teacher Cat is the fifth picture book in the Cat series. These delightful books were written by Deborah Underwood and illustrated by Claudia Rueda. If you aren’t familiar with Cat, you should know that the books follow a similar format. The narrator addresses Cat directly, and Cat responds by holding up signs that express his feelings. Cat is a bit of a curmudgeon and he can be selfish at times, but he has a good heart.

As the title suggests, Cat spends this book working as a substitute teacher for a class of little kittens. At first, he seems intimidated by the job, but he quickly realizes how much fun he can have and the students seem to appreciate his “improvements” to music, building blocks, and art. But can they clean up their mess before Ms. Melba returns? END_OF_DOCUMENT_TOKEN_TO_BE_REPLACED

I first heard about The Madness of Lord Ian Mackenzie in one of my message boards. The plot intrigued me, and so I sought out a copy via my library network. There was a wait list, but within days, I arrived at the top of the list and downloaded the book onto my Kindle.

The Madness of Lord Ian Mackenzie is the first book in Jennifer Ashley’s Mackenzies series. This Victorian romance features the titular Lord Ian, the younger brother of a duke. Lord Ian has quite a reputation- he spent much of his youth in a private asylum, and now as an adult, he enjoys collecting Chinese pottery. He proves to be a valuable asset to his oldest brother’s trade deals because he can recall entire conversations verbatim, even if the negotiations took place in another language.

As soon as Ian meets Beth, he is absolutely smitten. Beth also arrived at her present situation in a rather unconventional manner: after her pastor husband passed away, she served as the companion for a wealthy lady who left Beth a large inheritance. Beth has never met anyone like Ian, nor has she ever been pursued with the intensity in which Ian pursues her. END_OF_DOCUMENT_TOKEN_TO_BE_REPLACED

I purchased The Force Oversleeps for the girls because they have enjoyed the previous books in this series. This is the fifth book in Jarrett J. Krosoczka’s Jedi Academy series.

This book is about a boy named Victor who is starting his second year at Jedi Academy. He’s hoping to get the lead role in the school play, but it doesn’t work out. That’s not even the worst thing though- everyone thinks that Victor’s big sister is going to the dark side! END_OF_DOCUMENT_TOKEN_TO_BE_REPLACED 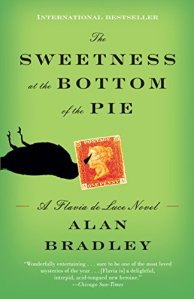 The Sweetness at the Bottom of the Pie is the first book in Alan Bradley’s Flavia de Luce series of mystery novels. I actually listened to this book awhile ago, but I fell behind with my reviews and did not have the opportunity to write a review until now.

Flavia de Luce is a precocious young girl who lives in a crumbling mansion with her father and sisters. Her two passions are chemistry and tormenting her sisters. One day, Flavia finds a dead bird with a rare stamp pinned on its beak. Not too long after that, she finds a dying man in the garden. Flavia knows that she can solve the case faster than the police, and she sets off on her trusty bike to delve into long-buried schoolboy secrets and the intense world of stamp collecting. END_OF_DOCUMENT_TOKEN_TO_BE_REPLACED