Herding Cats was created by Sarah Andersen, and it is a collection of her Sarah’s Scribbles comic. I was excited about the opportunity to read this book because I’ve seen some of Andersen’s comics shared on social media, and I appreciate her brand of humor.

Herding Cats is an astute look at “adulting”, and how stressful modern life can be. There is a new comic on each page, and the jokes are more observational humor rather than a cohesive storyline with characters. Some of the jokes are broad, like time management and being anxiety prone. Some of the jokes are oddly specific, like trying (and ultimately failing) to refold a shirt at a clothing store. But all of the jokes were relatable to me as a thirtysomething year old woman. END_OF_DOCUMENT_TOKEN_TO_BE_REPLACED

I preordered this book back in March, so it was very exciting when the Amazon delivery van pulled up in front of my house. My three girls wanted to read this book immediately, and I was happy to oblige.

Here Comes Teacher Cat is the fifth picture book in the Cat series. These delightful books were written by Deborah Underwood and illustrated by Claudia Rueda. If you aren’t familiar with Cat, you should know that the books follow a similar format. The narrator addresses Cat directly, and Cat responds by holding up signs that express his feelings. Cat is a bit of a curmudgeon and he can be selfish at times, but he has a good heart.

As the title suggests, Cat spends this book working as a substitute teacher for a class of little kittens. At first, he seems intimidated by the job, but he quickly realizes how much fun he can have and the students seem to appreciate his “improvements” to music, building blocks, and art. But can they clean up their mess before Ms. Melba returns? END_OF_DOCUMENT_TOKEN_TO_BE_REPLACED 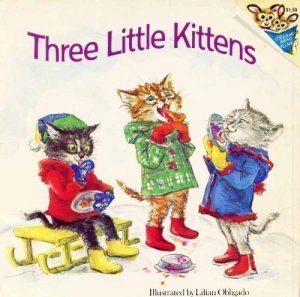 Three Little Kittens is a traditional children’s nursery rhyme. This edition was illustrated by Lilian Obligado, and it was originally published in 1974.

The text closely follows the original nineteenth century nursery rhyme, with very few changes. This is the story of a trio of kittens who lose their mittens, angering their mother. They are told that they can’t have any pie, and this motivates them to look for their mittens. They find their mittens, but then get them dirty because they’re wearing them while eating pie. Will things ever go right for these three little kittens? END_OF_DOCUMENT_TOKEN_TO_BE_REPLACED 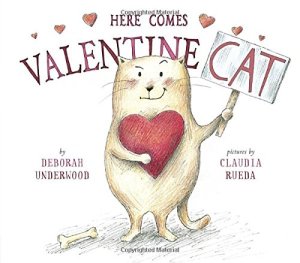 My three girls have been big fans of Deborah Underwood’s “Cat” series since we first discovered Here Comes Easter Cat almost two years ago. The girls were delighted by the mischievous and sarcastic cat, who just happens to have a heart of gold under his snarky façade.

Here Comes Valentine Cat follows the format of the other books: the narrator speaks directly to Cat, who responds by holding up signboards with his responses. Because cats don’t talk, of course!

Valentine’s Day is coming, and the narrator wants to know if Cat has any plans. Cat indicates that there is a dog who lives next door, but he thinks the dog is annoying. Cat plans to make some mean valentines, and to send the dog to the moon- but is the dog really as annoying as Cat says he is? END_OF_DOCUMENT_TOKEN_TO_BE_REPLACED

I love reading books with my girls, so when I had the chance to read The Adventures of Miss Petitfour, I was very excited. This children’s chapter book was written by poet and author Ann Michaels, who is making her children’s book debut. The book features charming illustrations by Emma Block.

It’s hard to describe Miss Petitfour. She has sixteen cats, and she likes to fly around by making a parachute out of a tablecloth and letting the wind sweep her and the cats away. The book is broken into a series of short adventures, usually involving some sort of catastrophe, like a valuable stamp blowing away on a snowy day or narrowly avoiding landing in the river on their way to pick up some birthday cheddar. END_OF_DOCUMENT_TOKEN_TO_BE_REPLACED

My oldest daughter and I absolutely loved The One and Only Ivan, so I was very excited about the opportunity to read Katherine Applegate’s newest novel, Crenshaw.

Jackson is a young boy who lives in an apartment with his parents and his sister. The family doesn’t have a lot of money, and Jackson and his sister are often hungry.
Jackson is a very intelligent boy, who loves animals and relies on facts. When he begins to see a giant cat named Crenshaw, he isn’t sure what to think of this development. After all, it is a fact that imaginary friends are just that- imaginary. They aren’t real. They can’t be real. Or are they?

As Jackson watches his parents gathering up most of their possessions to sell at a yard sale, the family’s financial situation becomes more apparent. There is the possibility that they will have to leave their apartment and live in their van, something that happened several years ago. It was at this point in his life that Crenshaw appeared the first time. Has Crenshaw returned to help Jackson again?

This was an incredibly poignant story. Jackson is an incredibly mature and insightful boy. He cares deeply about his family, especially his little sister, who he tries to protect from seeing how dire things are. Jackson loves his parents, but he is frustrated with the situation. He also struggles with the possibility of losing his home, his friends, and having to leave his school and go somewhere else. Applegate deftly weaves a story that shines a light on the reality of homelessness: the struggle for some families to keep up with the bills, and how suddenly families can lose everything. Jackson’s parents are not drug users or lazy (insidious stereotypes); they are average adults who work multiple jobs and try to provide their children with the best life possible.

Crenshaw is an emotionally powerful book best suited for children in elementary school. Jackson is the only person who can see the giant cat, and he (Crenshaw) is often spotted doing funny things like riding a surfboard or taking a bubble bath. These moments of comic relief help break the tension, and once Jackson accepts Crenshaw as real, the cat provides the boy with much needed emotional support. This book will surely become a classic, just like The One and Only Ivan.

My three girls fell in love with Cat over a year ago when we borrowed Here Comes the Easter Cat from the library. This book was followed by Here Comes Santa Cat around the holiday season. These delightful picture books were written by Deborah Underwood and illustrated by Claudia Rueda.

Here Comes the Tooth Fairy Cat is the third entry in the series. At the beginning of the book, Cat has just received a coin from the tooth fairy. Cat is disappointed that he didn’t get to meet her, so he hatches a scheme to trick the tooth fairy by giving her a tooth from a comb. Everyone knows you can’t trick the Tooth Fairy, and she sends Cat a note. If Cat can help her with some deliveries, he can meet her. Cat is joined by a mouse that also tried to trick the Tooth Fairy. Cat is usually thinking of ways to benefit himself- can he work together with Mouse to make those deliveries? And will Cat ever get to meet the Tooth Fairy? END_OF_DOCUMENT_TOKEN_TO_BE_REPLACED

As soon as I saw Here Comes The Easter Cat featured in an email from Amazon.com, I knew I had to track down a copy. I was able to request one through the library network, and it arrived a few days later.

The illustrations are charming. They are relatively simple sketches, but what makes them truly interesting is the presentation. Cat doesn’t talk, so when he has something to say, he holds up a signboard with a picture on it. My girls quickly got the joke when Cat makes a face and holds up a signboard with hearts on it in response to the question, “The Easter Bunny? What about him?”

My girls loved this book, and their love for this book grows with every reading. Bex and Snickers cackle so much that Alligator yells at them for laughing too loudly and making too much noise.

We have to return this book to the library in a couple of weeks, and I think we are going to have to get our own copy. If you’d like to get a copy, please follow this link.