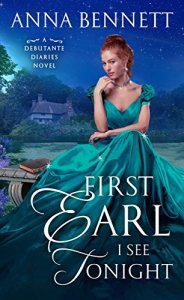 First Earl I See Tonight is the first book in Anna Bennett’s Debutante Diaries series of Regency-era historical romance novels. This might be a new series, but I thoroughly enjoyed her Wayward Wallflowers series, so I was looking forward to the experience.

Fiona’s father is not an aristocrat, but her sizeable dowry has the ability to open doors that might otherwise be closed to her. Fiona has always intended to marry for love, but when she receives a note from a blackmailer threatening to expose family secrets, she knows that she needs to act fast. If she marries quickly, she can use her dowry money to pay off the blackmailer and protect her sister’s reputation.

She chooses David Gray, the Earl of Ravenport because his financial situation is an open secret. He was also recently jilted, so Fiona hopes that these factors will work in her favor and compel Ravenport to go along with her wild scheme. END_OF_DOCUMENT_TOKEN_TO_BE_REPLACED 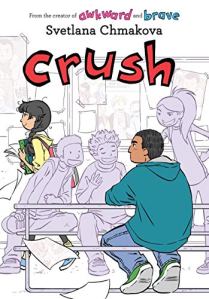 Crush is Svetlana Chmakova’s third graphic novel set at Berrybrook Middle School. I was very excited about the opportunity to read this book because my oldest daughter is in the sixth grade, and she loves graphic novels. For several years, she read graphic novels almost exclusively. She has always been a voracious reader, so this meant that we always had a lot of graphic novels in the house. She has recently branched out and found some novels that she really likes, but she still loves graphic novels.

Since she is an expert in the genre, I thought that it would be nice if she could share her thoughts on Crush:

So, I just want to say that I LOVE Svetlana Chmakova’s books, and that I was so exited when I heard there was a third book! END_OF_DOCUMENT_TOKEN_TO_BE_REPLACED

Us is a contemporary m/m romance novel by Sarina Bowen and Elle Kennedy. It’s the second book in their Him/Us duology. I listened to the Audible edition of Him earlier this year, but only recently got around to listening to Us.

The story picks up a couple of months after the events of Him. Jamie and Wes are living together in Toronto- Jamie works as a coach for an elite youth hockey team, and Wes is a rookie for the city’s NHL team. However, they are living as roommates because Wes isn’t ready to be an openly gay professional athlete. Their luxurious apartment is their sanctuary, but that changes when one of Wes’ boisterous teammates moves into the building. He wants to hang out all the time, and it’s becoming harder and harder for Wes and Jamie to keep their relationship a secret. Is this a sustainable plan for them or will it tear them apart? END_OF_DOCUMENT_TOKEN_TO_BE_REPLACED

The Kiss Quotient was written by Helen Hoang. I’d heard a lot of buzz about this book, so I was very excited when I found it on the new release shelf at my town library. To make a long story short, I enjoyed this book so much that I purchased my own copy- and I added the Audible edition as well.

Stella Lane is a young woman on the autism spectrum. She has a long list of academic and professional accomplishments, but she has not had very much success with romance. Stella decides that she needs to change this by hiring an escort to teach her to be better at the physical aspects of a relationship- from kissing to intercourse, and everything in between. Stella’s first encounter with Michael Phan is fairly benign, and Michael agrees to work with her exclusively- eschewing all other clients. Instead of being irritated by her eccentricities, Michael is patient, and willing to work with her. He finds himself feeling genuine attraction instead of faking it like he usually does with clients. But is there any possibility of a future together with such different backgrounds? END_OF_DOCUMENT_TOKEN_TO_BE_REPLACED

Bloodline is the fifth book in Jordan L. Hawk’s Whyborne & Griffin series. I started reading the series this summer, and I try to have large gaps between each book; there is only a finite amount of material, and I want my experience to last as long as possible.

After their adventure in Egypt, Whyborne and Griffin return to Widdershins. Their lives to return to whatever passes until normal until they are faced with a new predicament involving abandoned ships, cryptic notes, a murder, and mysterious cousins from England. Once again, Whyborne and Griffin see the hallmarks of something supernatural, and find themselves racing to save humanity (or at least the city of Widdershins) from an unknown threat. END_OF_DOCUMENT_TOKEN_TO_BE_REPLACED 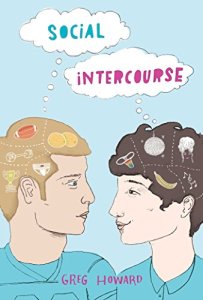 Social Intercourse is a YA novel by Greg Howard. I don’t remember where I heard about this book, but the plot intrigued me, and so I made a request through my library network, and the book arrived a couple of days later.

It’s not easy for Beckett Gaines to be a gay teen in South Carolina, but he knows that he only needs to make it through high school and then he can leave his homophobic hometown. His plan is somewhat derailed when his dad starts dating one of football star Jaxon Parker’s moms.

Beck has accepted that his own mother abandoned the family, but he’s not too thrilled about the development because of his contentious history with Jax. Likewise, Jax wants his moms to get back together, so the two boys do what any reasonable teens would do and hatch a plan to break up Beck’s dad and Jax’s mom. What neither of them counted on was developing feelings for each other. END_OF_DOCUMENT_TOKEN_TO_BE_REPLACED 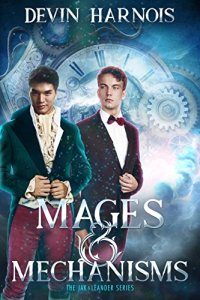 Mages & Mechanisms was written by Devin Harnois. This is a m/m romance novel set in a steampunk fantasy world. I picked up this book on Kindle Unlimited after seeing a few recommendations for it on Facebook.

Leander is a gifted craftsman, but business has not been very prosperous lately. He decides to hire a mage to bring his mechanical creations to life, and as soon as Jak arrives at the shop, it’s clear that there’s no one better suited for the job. Jak is quite different from anyone Leander has ever met before, and their odd partnership yields spectacular results. Their creations catch the eye of a wealthy aristocrat who offers a large lifechanging amount of money to build a mechanical dragon. They work so well together, but this would be their most ambitious project to date. And as if that weren’t challenging enough, Leander and Jak are finding it increasingly difficult to deny the attraction building between them. END_OF_DOCUMENT_TOKEN_TO_BE_REPLACED

Dear Evan Hansen: The Novel was written by Val Emmich. It is, of course, based on the Tony award winning musical by Steven Levenson, Benk Pasek and Justin Paul. I was very excited about the opportunity to read this book because my girls and I have been listening to the DEH soundtrack since the spring.

Evan Hansen is a high school boy with anxiety. He’s supposed to be writing inspirational letters to himself as a therapeutic exercise. One of these letters ends up with Connor Murphy, who commits suicide in an unrelated incident. When the Murphys find the letter, they believe that Connor wrote the letter to Evan. Instead of telling the truth, Evan allows the Murphys to believe that he was Connor’s best friend and fabricates an entire relationship. This desperately lonely boy finally has people paying attention to what he has to say, but it’s all for the wrong reasons. He has everything he could ever want, but it’s all based on lies. How can he tell the truth now? END_OF_DOCUMENT_TOKEN_TO_BE_REPLACED

Band Sinister is a Regency-era m/m romance novel by KJ Charles. I received an ARC of this book, and before I launch into my review, I want to share how excited and grateful I am for the opportunity. For Charles’ last two books, I stumbled upon the submission form for review copies too late. Needless to say, I was thrilled when I was able to submit a request for Band Sinister.

Guy and Amanda Frisby live in bucolic mediocrity, and while they aren’t necessarily happy with their forced seclusion, they endure it because that’s the way things need to be.

As the story begins, Amanda has just written a gothic novel based on their neighbor Sir Philip Rookwood and his friends. Amanda breaks her leg in an accident, and is taken to Rookwood Hall to recover. Guy is obligated to join her in order to maintain a sense of propriety; no decent woman will serve as chaperone because of the rumors surrounding Sir Philip and his friends. They are certainly an eclectic bunch, but they are kind to the Frisbys.

Guy realizes that Rookwood Hall is not the wretched hive of scum and villainy that he was led to believe. There’s clearly a connection between Guy and Philip, but Guy has never allowed himself to even acknowledge such feelings, let alone act upon them. Philip is much more (so much more) experienced, but he’s gentle and patient with Guy, who proves to be equally adept and curious. Guy is so shy that he can’t even say what he wants in English- he reverts to Latin. And if that’s not the sweetest most precious thing in the entire world, I don’t know what is.

In many books, conflict stems from a Big Misunderstanding that could have been resolved with a frank conversation. Conflict in Band Sinister does not fall victim to this pitfall; it’s much more realistic, and it’s heartbreaking to contemplate the weight of obligation versus doing what the heart wants.

I loved everything about Band Sinister. I took two classes about gothic novels in college, so I appreciated the inclusion of a gothic novel as a plot point. I’d like to think that Charles named the Frisbys after the family of mice in the children’s modern classic Mrs. Frisby and the Rats of NIMH. It would be so delightfully perfect.

Speaking of delightfully perfect, I’m grateful for the lessons in some of the salacious lines from Latin literature.

On a more serious note, despite the frequent doses of levity, this book presents some serious points on family bonds, friendship, love, redemption, consent, and trust.

I would absolutely recommend Band Sinister to fans of m/m historical fiction. This is absolutely my favorite KJ Charles book. I received my copy at the end of August, and I’ve read the book at least 3-4 times since then. I plan to buy my own copy of this book, and if an audiobook is produced, I’ll buy that too. I can’t wait to read Charles’ next book, but in the meantime, I will content myself with another readthrough of Band Sinister. 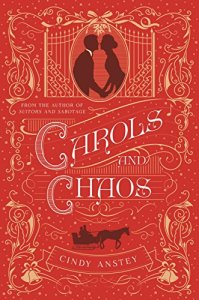 Carols and Chaos is a young adult historical fiction novel written by Cindy Anstey. I was very excited about the opportunity to read this book because I have enjoyed her three previous books.

Carols and Chaos serves as a companion to Suitors and Sabotage, but each of the two books offers a very different perspective. Both books are set during the Regency era and both have young adults as their protagonists, but Suitors features members of the gentility whereas the two protagonists in Carols are servants. Upper servants, yes, but servants nonetheless.

Kate Darby has established herself as a lady’s maid. This is not to be a permanent occupation- Kate intends to open up her own dress shop one day when she has saved up enough money. The young ladies she assists are amiable, but her job is not always easy because her mother (who lives nearby) asks for help and doesn’t understand that Kate’s focus needs to be on her duties at the manor house. Kate also does not need to be distracted by the handsome Matt Harlow, who serves as valet to the Steeple brothers, who have come to stay at the house for the Yuletide season. END_OF_DOCUMENT_TOKEN_TO_BE_REPLACED