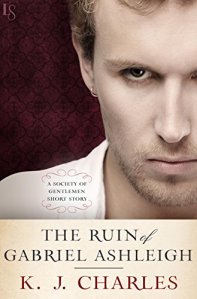 The Ruin of Gabriel Ashleigh is a short story/novella in K.J. Charles’ A Society of Gentlemen Regency-era m/m series. There was a preview for this story at the end of one of the other books in the series, and it piqued my interest.

Gabriel Ashleigh, who goes by Ash, is the younger son of a duke. At 26, he has been spending most of his time carousing and being a general nuisance. So when he runs into Francis Webster at a gaming hell, he sees an opportunity for revenge. There is a deep-seated animosity between Ash (and his brother) and Francis that goes back many years.

But instead of vindication, Ash ends up losing almost everything to Francis in a card game. Alas, if he had not been so drunk, he might have realized that his card skills are no match for Francis’. Ash is utterly ruined, but then Francis gives him a chance to win everything back in another card game.

It is amazing that Charles can fit so much into a relatively short story (49 pages). The tension between Ash and Francis is almost palpable. Ostensibly, they loathe each other, but there’s something more there as well. Perhaps Ash isn’t the only one with an ulterior motive.

I would absolutely recommend The Ruin of Gabriel Ashleigh. This is an interesting take on the enemies to lovers trope. Francis and Ash are secondary characters in the series, so I think it functions fairly well as a standalone. These two have such a compelling backstory- my only complaint is that they only get a novella rather than a full-length book.