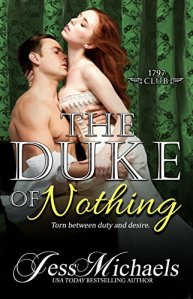 The Duke of Nothing is a romance novel written by Jess Michaels. It is the fifth book in her Regency-era 1797 Club series. I was excited about the opportunity to read this book because I thoroughly enjoyed the fourth book in the series- The Silent Duke.

Baldwin Undercross is the Duke of Sheffield, and as the story begins, he finds himself in quite a predicament. He’s virtually insolvent, and if he doesn’t marry an heiress, he will certainly lose what little he has left.

Helena Monroe meets Baldwin at a party, and because she is an American, he assumes that she is the wealthy American heiress who is in town to align her family’s wealth with an ancient title. However, Helena is not the heiress- she is merely her wealthy cousin’s companion. There is an instant connection, which blooms into a mutual attraction. The duchesses in Baldwin’s circle of friends work tirelessly to contrive situations for Helena and him to meet, but of course, they have no idea how dire his financial situation is. And likewise, Helena faces ruination if their clandestine meetings are discovered.

This was a very sweet book. It seemed like there was no possibility of things working out for Baldwin and Helena, but I have to wonder why Baldwin was so determined to hide the truth from his friends. It’s understandable that there is a certain amount of shame about being on the verge of losing everything, but this fear of asking for help probably made the situation worse. It was fairly easy to figure out the “big reveal”, but that didn’t make it any less exciting because it was clearly a surprise to the characters.

I would recommend The Duke of Nothing to fans of historicals. This is only the second book I have read in the series, but they are two vastly different books. I am looking forward to catching up on the books I have missed, as well as seeing what Michaels has planned next!

I received a digital copy of this book from Netgalley/the publishers in exchange for an honest review.