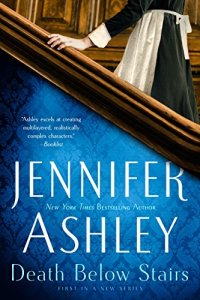 Death Below Stairs was written by Jennifer Ashley, and it is the first book in her new Below Stairs series of Victorian mysteries. Although this marks Ashley’s first foray into the mystery genre, she is best known for her books featuring the Mackenzie family, a series of Victorian historical romances. I have only read the first of her Mackenzies books- The Madness of Lord Ian Mackenzie– and it was absolutely amazing. Needless to say, as a fan of historical mysteries, I was very excited about the opportunity to read this book.

Kat Holloway is a young chef who begins a new position in the household of Lord Rankin. She immediately senses some irregularities, but she is caught off guard when Sinead, the girl she was hoping to train as her assistant, is found dead. While everyone is content to believe that the unfortunate girl was the victim of a burglar, Kat senses there is more to the story than that.

Luckily for Kat, she has a “friend” who might be able to help her with any investigating. Daniel McAdam seems like a simple deliveryman, but Kat knows that he is far more complex than he appears to be. Together, Kat and Daniel try to discover the truth behind Sinead’s death. They are joined in their efforts by Lady Rankin’s sister (who prefers to dress in men’s clothing) and Daniel’s friend. This unlikely quartet find themselves racing against the clock to stop any more people from dying at the hands of those who would wish for their secrets to remain secret.

I loved this book! Kat is a delightful protagonist. She is assertive and she is competent. She has suffered some setbacks in life, but has persevered and managed to make a life for herself. The mystery was satisfying, and there was a second layer to the resolution that I did not anticipate.

I would absolutely recommend Death Below Stairs to fans of historical mystery. Likewise, fans of historical romance might also enjoy branching out into a new genre. We have seen forays into the world “below stairs” before; most recently in Downton Abbey, but that formidable show split its storylines between Lord Grantham’s family and the lives of the servants running his household. Death Below Stairs focuses almost exclusively on the lives of the servants, and I found it quite fascinating to see Victorian London from Kat’s eyes. I am certainly looking forward to the next book in the Below Stairs series, and until then, I am going to have to work on catching up on the Mackenzies series!