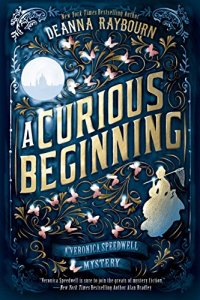 My town library has a section of books for sale for $1 apiece. On a recent trip, I saw four- that’s right- FOUR Deanna Raybourn books on the shelf. Her Lady Julia mysteries had been on my radar, so I was very excited to find four them in like-new condition. I have a rather large to-read pile, and before I had a chance to read them, I received an opportunity to read an advanced copy of Raybourn’s newest book, A Curious Beginning.

I was ridiculously excited about this, and I absolutely devoured the book. A Curious Beginning introduces us to Veronica Speedwell. As the story begins, Veronica is burying her last remaining guardian. This sets off a chain of events including but not limited to: a ransacked cottage, an attempted abduction, a rescue by an German baron who claimed to know her mother, and her introduction a gentleman named Stoker. When the baron is found murdered, Veronica and Stoker must flee before they are implicated for the crime.

Stoker has several eclectic groups of friends, from a traveling circus to an eccentric aristocrat with a magnificent collection of oddities. As Veronica and Stoker evade the authorities, they must also consider the possibility that all this mayhem might have to do with Veronica. She was raised by two spinster sisters and had always been told that she was a foundling, but it cannot be denied that all this trouble started when with the death of her guardian. Who is Veronica Speedwell?

A Curious Beginning was such a delightful book. I loved every minute of it. Veronica is a delightful narrator; she is clever and witty, and she adapts well to new situations. She is devoted to lepidoptery, and has traveled in pursuit of new specimens. She has also embarked on a series of assignations, but only when abroad and never with Englishmen.

This puts Veronica in quite a predicament because the chemistry between her and Stoker is palpable. But she has her rule about never being involved with Englishmen and he has demons of his own to contend with, and is not interested in pursuing anything physical. Besides, there is hardly enough time for trysting when being pursued by nefarious characters!

Raybourn’s prose is exquisite. The book is full of art, mythology, current events (circa 1887) and other cultural references. Victorian England comes to life, from the small circus to the streets of London. Raybourn has populated her book with a cross section of humanity. Even minor characters only have well developed personalities, so that there is no question of their beliefs and intentions. The mystery aspect is satisfying, although there is plenty of room for further development in the subsequent books in this planned series.

I would absolutely recommend A Curious Beginning. I thoroughly enjoyed my reading experience. This was a lovely mix of historical fiction, mystery, and the tiniest hint of romance. I am looking forward to reading the books in Raybourn’s Lady Julia series while I eagerly await Veronica Speedwell’s next adventure.