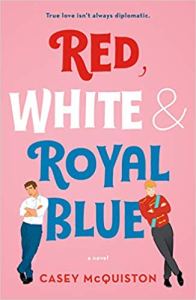 From the moment I heard about Red White & Royal Blue, I knew that I would absolutely fall in love with it. I received an ARC via Netgalley, but I have purchased my own copy of the Kindle edition AND I added the Audible. I’m probably going to buy the paperback as well; that’s how much I love this book.

Red White & Royal Blue is Casey McQuiston’s debut novel, and wow, what a debut. Alex Claremont-Diaz is the son of the President. Prince Henry is- well, a prince. They have been lowkey feuding for years, and their mutual animosity leads to a disaster at a wedding they are both attending. With the fiasco showcased around the world, they are forced to spend time together in an attempt to minimize the fallout.

And then they realize that all of their preconceptions might not be entirely accurate.

Finding excuses to visit each other and keeping their relationship a secret from the paparazzi isn’t easy, but Alex and Henry have never been happier than they are when they’re together. But how long can this last?

It’s 2020, and Alex’s mom is up for re-election… this relationship might affect his mother’s electability in the more conservative states? And even though he is a younger son, Prince Henry is still expected to toe the line; being openly gay is not an option for him.

This book is absolute perfection. Alex and Henry are both amicable, and their banter is hilarious. Their chemistry is off the charts scorching, but McQuiston prefers a more subdued approach to love scenes. There are no play-by-play descriptions, which works well; it didn’t seem like the book was missing anything because of this.

Given the clandestine nature of the relationship, it’s no surprise that there’s a moderate amount of angst, and McQuiston captures it so well. But no worries- there’s a nice balance between the angst and the lighter moments.

I also loved the backstory: we’re still dealing with the contemporary United States and England, but President Claremont won the election in 2016 (and became the first female President), and while Prince Henry is the Queen of England’s grandson, his mother is the royal, and his older brother Prince Philip is a total jerk. There are elements of our actual history, but McQuiston did a wonderful job with creating original characters.

I would absolutely recommend Red White & Royal Blue. Alex and Henry are both in their early 20s, so I’m sure there’ll be some crossover appeal with older YA readers even though the book has not been marketed as such. I read this book a couple of months ago, and I have not been able to stop thinking about it. This book has earned a place on my Most Favorite list, and I can’t wait to see what McQuiston is going to do next! In the meantime, I’m anxiously waiting for the RWRB movie!