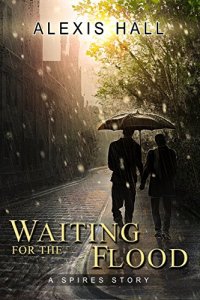 Waiting for the Flood is a contemporary m/m romance novel by Alexis Hall. I read the kindle edition of this book back in December during the reading spree in which I read most of Hall’s books. I recently listened to the Audible edition of this book, and I’m pleased to say that it is just as sweet the second time around.

It’s been several years since Edwin broke up with his boyfriend of ten years. Marius has moved on, but Edwin has been in a funk ever since then. It’s not that he doesn’t want to move on, but he’s not quite sure how.

When a flood comes to Edwin’s street in Oxford, an engineer arrives to assess the flood threat and mitigate as much damage as possible. Adam is confident and competent and seems to be interested in Edwin, although Edwin can hardly contemplate the possibility.

But Adam is going to be working in the neighborhood until the floodwaters recede, so there’ll be plenty of time for Edwin to get to know him.

This book is a little shorter than Hall’s other books, but just as introspective. It’s single perspective, which keeps the reader in Edwin’s mindset and prevents the reader from knowing more than our intrepid protagonist/narrator. Edwin is an absolute cinnamon roll. He was with Marius for the first ten years of adulthood, and even though it’s been several years since the relationship ended, Edwin is still plodding along. He’s not quite pining; he’s accepted that the relationship has ended, but he spent so long being part of a “they”, and he’s not quite sure what to do with himself now.

For what it’s worth, Adam is also a total cinnamon roll. He’s clearly very interested in Edwin, but he’s not aggressive about it at all. He flirts so sweetly and calls Edwin “petal” and is so sweet and patient. For those of you who have read Hall’s other books, there’s a lot less heat than what’s typical for Hall. This shouldn’t be seen as a downside: the lower heat level and the slower pace work so perfectly here.

I would absolutely recommend Waiting for the Flood. This is part of Hall’s Spires series, but the books are only loosely connected, so it’s not necessary to read the series in order. It’s just so lovely to have such sweet people find each other. This is definitely one of those books that I’m going to enjoy revisiting from time to time.