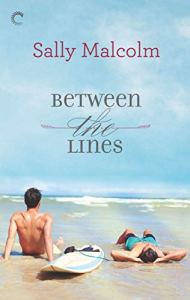 Between the Lines was written by Sally Malcolm. This contemporary m/m romance novel is set in the same world as Perfect Day, one of Malcolm’s other books. I don’t read a lot of contemporary romance, but the plot of this book piqued my interest.

Theo has arrived in New Milton to close the deal on purchasing the Majestic, a seaside hotel that has fallen into disrepair. This is a big opportunity for Theo to finally impress his father, who sees him as incompetent.

Luca has returned to the Majestic to try to talk his mother out of selling the hotel to a big corporation. Luca grew up at the Majestic, but it hasn’t felt much like home to him for years. His stepfather does not accept that Luca is gay, and so Luca lives a nomadic lifestyle- living by the beach during the summer and the ski slopes in the winter.

Naturally, Theo and Luca clash- Luca wants to save the hotel, and Theo is simply there to do a job. But they soon realize that they can’t ignore the spark of attraction. They agree to a no-strings-attached fling, but the more they get to know each other, the harder it is for them to deny that they aren’t connecting on a deeper level. And with the sale of the hotel looming, will they really be able to walk away from each other unscathed?

This was a delightful book. One of the things that sets this book apart is that Theo has dyspraxia, a neurological condition that affects his coordination as well as his thought process. Luca sees Theo as standoffish as first, but he is empathetic once Theo tells him about the dyspraxia. These two heroes have very different personalities, so it was very sweet to see them find common ground. Theo spends the first part of the book restrained and buttoned up, but he learns to relax. Likewise, Luca arrives frustrated and angry, and he also learns to relax.

I would recommend Between the Lines to fans of contemporary m/m romance. The tone is fairly light with just enough angst to keep things interesting. Theo and Luca are delightful together, and I’m pleased to have discovered Sally Malcolm. I’m looking forward to reading more of her books in the future!