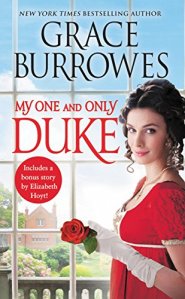 My One and Only Duke is the first book in Grace Burrowes’ Rogues to Riches series of Regency-era historical romance novels. I was excited about the opportunity to read this book because I enjoyed Burrowes’ Windham Brides series, and a new series meant a fresh start with new characters.

Quinn Wentworth started with nothing, and built a prosperous banking empire for himself and his siblings. But as the story begins, Quinn is in Newgate, facing execution for a murder he did not commit. It is there that he meets Jane, a pregnant vicar’s daughter. Jane is not married; she eloped to Scotland with a handsome soldier, who turned out to be a rogue, but he was killed in a duel. Jane already caused one scandal by eloping, and now she faces a second one. Quinn offers to marry Jane, so that his estate can provide financial support for her and the unborn baby. He’s going to die anyway, so why shouldn’t he do one final magnanimous gesture?

But Quinn does not die- as it turns out, he is the heir to the Walden dukedom, so he is summarily released from prison, and now he has a new wife and a title to go along with his existing wealth, and no idea what to do with either.

I thoroughly enjoyed this book. It started out very dramatically, and the steady pace kept me hooked. Quinn and Jane were absolute strangers, and now they find themselves married. Jane needs to adjust to life in Quinn’s home with his eccentric siblings, and manage her father, who disapproves of her new husband. Quinn and Jane’s romance is a slow burn, and it was so sweet to see their mutual affection grow into attraction. The secondary characters are well rounded; some add whimsy and some add to the conflict, but they provide the book with a sense of depth.

I would absolutely recommend My One and Only Duke. This is a solid introduction to a new series, and Burrowes does a wonderful job of introducing the reader to her new world. There are so many delightful characters that I would be hard pressed to choose whose story I would like to hear next! I am already looking forward to the next book in the series!