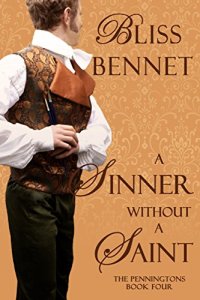 A Sinner Without a Saint is the fourth book in Bliss Bennet’s The Penningtons series of Regency-era historical romance novels. I was not familiar with Bennet before this, but as soon as I saw that this entry featured a m/m pairing, I was intrigued.

Benedict Pennington might be the younger son of a peer, but he is also a talented artist who harbors strong opinions about art. He believes that art museums should be accessible to everyone, and not even the wealthy people who can afford private collections.

Viscount Dulcie is the heir to his father’s earldom, and he has spent most of his life courting scandal. Dulcie and Benedict were at school today, and the latter had a bit of a crush on the former. They have not encountered each other since then, but when they are forced into close proximity, they realize that their feelings have not dissipated over the years.

I liked this book quite a bit. It’s an interesting combination of estrangement/reunion as well as a slow burn. It’s clear that Benedict and Dulcie share a mutual attraction, but Benedict has stated that he avoids meaningless encounters; there has to be an emotional attachment to accompany any physical relationship. This is in direct contrast to Dulcie, who does not allow feelings of any sort to enter into his meaningless encounters. Throw in a fake engagement, a political campaign, minor betrayal, one very scandalous portrait, and you have the makings of a delightful novel.

I would recommend A Sinner Without a Saint. I always like discovering new authors. Many of the other characters from previous Pennington books make an appearance, and so my interest has definitely been piqued; I definitely plan to add their stories to my reading queue. I’m looking forward to reading more from Bennet in the future.