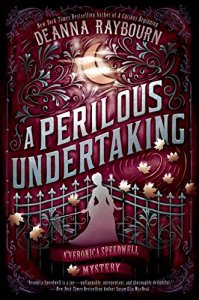 A Perilous Undertaking is the second book in Deanna Raybourn’s Veronica Speedwell series of Victorian era mystery. I enjoyed the first book in this series a couple of years ago, but I have only recently been able to read this book.

Readers should definitely read the first book in the series before tackling this one. Not only are there major revelations, but readers will appreciate the simmering tension between Veronica and Stoker. I will allude to some of these revelations from the first book because they are central to the second book, but I will not reveal anything outright.

Veronica finds herself tasked with another mystery to solve: Miles Ramsforth, a famous patron of the arts, has been accused of murdering his mistress. He has been convicted of the crime, and he is going to be hanged in less than a fortnight. However, someone very important- with connections to Veronica’s mysterious parentage- has reason to believe that Miles has been framed.

Veronica’s friend Stoker cautions her against becoming involved, but Veronica believes that solving this crime will improve her worth in the eyes of people she wishes to impress, and so she will not be deterred.

What follows is a delightful romp through all manner of seedy places, from an opium den to an abandoned pleasure grotto. As the case progresses, multiple suspects emerge, and it turns out that Miles is not the only one with secrets to hide.

I thoroughly enjoyed being immersed into Raybourn’s Victorian world. One of the best things about this book is the camaraderie between Veronica and Stoker. Their relationship is purely platonic, but it’s clear that there is a strong connection that they are choosing not to act upon. Another strength of this book is Raybourn’s secondary characters; they all have strong personalities and I wish that some of my favorites were featured even more prominently because they were so much fun.

I would absolutely recommend A Perilous Undertaking. As I’ve mentioned, readers will benefit from reading the series in order. This is a smart and fun historical mystery. On one hand, I regret that I waited so long to read this book, but on the other, I can jump right into the third book in the series without having to wait for it to be released! I am looking forward to reading more of this series in the future!