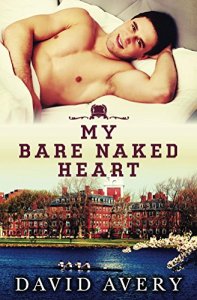 My Bare Naked Heart is a novel written by David Avery. I found it on Kindle Unlimited, and since I’ve been reading a lot of historical m/m lately, it seemed like the sort of book that I would enjoy.

John Branson is starting college at an all-male college in Vermont. He quickly falls in with the other young men in his dormitory, and this causes him to question his sexuality even more than he already has been. However, it is the 1950s, so coming out is absolutely impossible.

John’s new friends are obsessed with sex and with their penises, and they are constantly comparing themselves. This presents John with quite a challenge; naturally, he doesn’t want to be attracted to his friends, but the hypermasculinity in the dorm makes it difficult for him. As he struggles to find his place, he finds solace with his RA, but they have everything to lose if their budding relationship is discovered.

This was an interesting book. The friend group is a handful, and their banter lends a sense of levity to the narrative. However, the book could have benefited from more editing; there is a lot of repetition. Each young man’s penis is described multiple times- so often that it became a distraction.

Readers should know that this is also not a romance novel with a HEA. As I’ve mentioned, John struggles with his sexuality, and so he goes back and forth with his high school girlfriend and his new boyfriend. I don’t mention this for the sake of spoiling plot points, but because I know that infidelity is a dealbreaker with many readers. I’m looking forward to reading more from David Avery in the future.

I would recommend My Bare Naked Heart. It reminded me of the movie School Ties, except with sexuality instead of religion being the secret the protagonist is trying to hide from his friends at an all-male staid New England school. And, in a way, this reminded me of Porky’s because of the raunchy sex comedy aspect. This book is equal parts funny and poignant. I enjoyed my reading experience, and this is probably a title that I’ll go back and re-read at some point. I’m looking forward to reading more books by Avery in the future!