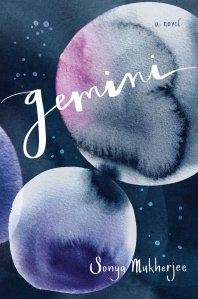 Gemini is a YA novel by Sonya Mukherjee. It had not really been on my radar, but the premise was intriguing.

Clara and Hailey are identical twins. They have tried their best to accentuate their individuality with small things (Hailey has pink hair), but it’s virtually impossible for them to truly be individuals because they are conjoined.

There’s a big of a backstory: after the girls were born, their parents gave up their careers in Los Angeles to move to a small Northern California town to raise the girls in relative seclusion. They go to public school, and they have friends, but a smaller town means fewer prying eyes. Their mother is obsessed with keeping the girls away from the general public. She’s afraid that the girls are going to end up in the tabloids, she’s afraid of exploitation, and she’s afraid that her beautiful girls might be subjected to unkind words.

As their senior year of high school begins, Clara and Hailey have accepted what their future holds. They will not be going off to college like many of their friends; they will be attending the university where their father is a professor. But is that what they really want?

The arrival of Max- a new boy in town- serves as a catalyst for change. Hailey has always wanted to go to art school, and for the first time, she begins to seriously consider it. I don’t think it’s a spoiler to say it’s because of anything Max says; that would be rather trite. No, it’s as if his mere presence is a reminder that there is a large world outside their small town.

Gemini is a sweet and tender novel. It is a struggle for teens to find their place in the world. There is an added challenge for identical twins to separate themselves and assert themselves as individuals. Hailey and Clara appreciate everything their parents have done for them, but they want more out of life than living at home. And as a mother myself, I empathized with the girls’ mother. Her fears might verge on paranoia, but her desire to protect the girls is understandable.

I would recommend Gemini. The chapters alternate between Hailey and Clara’s perspective, and this gives the reader a sense of their individual personalities. One of the most interesting aspects of this is that despite being conjoined, the girls have their secrets. This is Mukherjee’s debut novel, but I am looking forward to reading more from her.