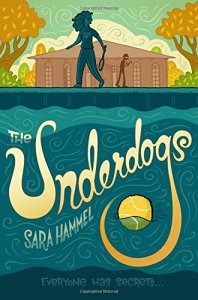 My oldest daughter is nine years old, and she and I are very fortunate to have received the opportunity to read ARCs of some middle grade books. When I first read the synopsis of Sara Hammel’s The Underdogs, I knew that I would like it, but I wasn’t sure how my daughter would react. She tends to be a sensitive soul, but we had enjoyed reading Isabel Feeney, Star Reporter– which is also about a murder mystery- so I gave it a shot.

Chelsea and Evie are best friends, who spend their days together at a tennis club. Chelsea’s mom works at the front desk, and Evie’s dad is a tennis pro. Their club is rocked to its core when one of the most popular members is found murdered. Annabel Harper was beautiful and vivacious, and did not seem to have any enemies. Chelsea and Evie are stunned, and they decide that it’s up to them to help the police solve the case. As they follow the detective around the club, the two girls discover that the club holds many secrets- but none of these secrets seem to lead the girls any closer to discovering who could have killed Annabel.

The Underdogs is so much more than a murder mystery. Over the course of the summer, Chelsea and Evie discover more about themselves. Evie is bullied by some of the kids at the club, and tries to figure out where her strengths lie. Likewise, Chelsea comes to terms with events that happened in her past.

That said, the mystery was satisfying and surprising. There’s also a twist that you won’t see coming. This is a middle grade book, so it’s appropriate for readers in the later years of elementary school and middle school too. The material isn’t too graphic, and there certainly aren’t any implications that anything untoward happened to Annabel before she was killed. My daughter did get a little scared during one scene, but as I mentioned, she does get scared easily.

I would absolutely recommend The Underdogs. My daughter and I read this together most evenings, and it took a great deal of self-control not to read ahead after she went to bed. I appreciated that this book was about more than just the mystery; it gave my daughter and me an opportunity to talk about bullying. There’s also a twist that neither of us saw coming. This is a stunning debut, and we are looking forward to reading more books by Sara Hammel in the future.