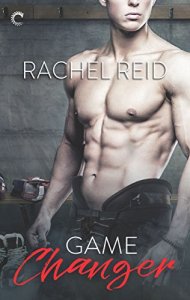 This is the first book in the Game Changers series, but it’s the second book I read—I started with an ARC of Tough Guy, the third book in the series, and I enjoyed it so much that I immediately bought books 1 and 2.

Kip makes dozens of smoothies during a typical work shift, but when the blueberry smoothie he makes for New York Admirals superstar Scott Hunter appears to pull the hockey player out of weeks-long slump, it becomes part of a new ritual for the two of them. Sure, Hunter is super hot, but it doesn’t mean anything… does it?

Well, dear reader, yes, it does mean something. Scott is gay, but he’s in the closet. There are no gay hockey players, so coming out could mean the end of his professional career and everything he’s worked for his entire life.

Kip and Scott have amazing chemistry, but Kip has never been in a relationship with anyone in the closet, and it’s not easy for him to have a boyfriend who he can’t spend time with in public, or even *tell* any of his friends and family about. Rationally, Kip knows that the pressure Scott feels is valid, but it’s hard not to take it personally.

Kip is absolutely adorable—he’s cute and funny and he’s so patient and kind with Scott. I wouldn’t necessarily say that meeting Scott serves as the catalyst for him thinking about his career goals, but the timeline overlaps. His retail job helps him save money (as does living at home), but he’s thinking about his long-term career goals.

Scott has kept a huge part of his life hidden from his friends, and that has to take a toll on his psyche. He’s never had a boyfriend before; his sexual encounters have always been anonymous hookups in foreign countries during the off-season. Having a boyfriend is magical and special and Scott wants more than anything to tell the world about Kip, but he just can’t, so he tries to show his appreciation in other ways, but the gesture isn’t the same as acknowledgement.

The feelings in this book are so complicated; they’re both right, of course, but Scott finds himself faced with a big decision. Kip doesn’t actively pressure him to come out, but it’s clear that it’s too difficult for Kip to remain in a secretive relationship.

Have I mentioned the amazing chemistry? OMG, do these guys work well together.

I would absolutely recommend Game Changer. I read this book for the first time back in January, but I re-read it while prepping to write this review. My second reading overlapped with Reid’s announcement of book 4, which will feature secondary characters from this book. Needless to say, I am looking forward to reading the next book in the series.