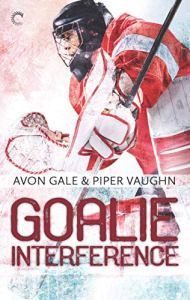 Goalie Interference is the second book in Avon Gale and Piper Vaughn’s Hat Trick series of contemporary m/m hockey novels. I enjoyed reading the Him/Us duology (by writing team Sarina Bowen and Elle Kennedy) and I was excited about the opportunity to read another hockey romance.

Emmitt gets called up from the minor leagues to be the Atlanta Venom’s newest goalie. This is a dream come true, but there’s one obstacle in his way- Ryu has been the Venom’s goalie, and he’s none too thrilled about this new hotshot interloper.

To make a long story short, this is a classic example of the enemies-to-lovers. At first, they justify their hookups as a way to channel all the frustration and loathing they feel for each other, but it grows into something more significant. However, they’re both competing for the same position, and while the team is using them in tandem (they seem to switch out every game), ultimately, there can only be one starting goalie. Their chemistry is scorching, but the decision will affect the trajectory of their professional careers.

This was more than just a simple hockey romance. Emmitt is black, and Ryu is Japanese-American, so they both can relate to what it’s like being a person of color in a sport that doesn’t have nearly as much diversity as other professional sports in the United States. I have to say that I loved the scene when Emmitt and Ryu went to an outreach event the youth community center in an attempt to get more kids interested in playing hockey. Another commonality was that Emmitt and Ryu both face family pressure. Emmitt’s father played professional football for a couple of years, and is disappointed that Emmitt chose hockey over football. Ryu’s father was an Olympic figure skater, and while his parents aren’t disappointed in his career choice, there’s an immense amount of family pressure to succeed.

As I’ve mentioned, Emmitt and Ryu have great chemistry, and Ryu is a bit bossy with Emmitt, which works well for their dynamic. Despite the tension surrounding the goalie position, the overall tone of the book is light, and some of the best scenes involve the outrageous behavior of Emmitt and Ryu’s Venom teammates.

I would absolutely recommend Goalie Interference. I thoroughly enjoyed my reading experience, and I’m looking forward to reading the rest of the Hat Trick series, as well as the Gale and Vaughn’s individual efforts.