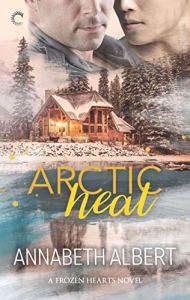 Arctic Heat is the third book in Annabeth Albert’s Frozen Hearts series of contemporary m/m romance novels. I haven’t read any of the other books in this series- or any of Albert’s other books- but the blurb piqued my interest.

Owen is a cancer survivor, and this polarizing incident has led him to reevaluate everything about his life. As the story begins, he has set aside his career as an investment banker, and arrived in Alaska in search of adventure as a national park volunteer.

Quill has spent his entire career as a park ranger. He’s quiet, he keeps to himself, and he thrives on predictability. The last thing he needs is to be partnered with someone gregarious like Owen- who looks completely unprepared for the harsh Alaskan winter.

One thing leads to another, and Owen and Quill begin a no strings attached relationship. But they’re sharing the staff quarters at a ranger station, so keeping things unattached becomes more complicated than either of them anticipated.

This was such a good book. It’s an interesting take on the forced proximity trope; for the majority of the book, Owen and Quill are at the same little ranger station, and aside from the tourists passing through, they don’t interact with anyone else for long stretches of time. It’s clear that they both have feelings for each other, but they have different philosophies about what is going to happen when Owen’s session as a volunteer comes to an end.

I really loved how Owen and Quill both grew over the course of the book. Quill finds himself challenged in ways he didn’t expect. He doesn’t talk about his personal life with anyone, and he hasn’t really been in a relationship before. Likewise, Owen has embarked on a journey of personal growth, and while he didn’t plan to find a romantic partner on this quest, he’s open to the possibility.

I’ve alluded to those moments of being stuck together in the ranger station, but I ought to mention that Owen and Quill’s work is not all drudgery, and there were some pretty intense scenes too.

I would absolutely recommend Arctic Heat. This book has a nice mix of sweet and angst. Owen is just delightful, and while Quill is much more reserved, he’s likeable too. I am pleased to have discovered a new author, and I’m looking forward to catching up on Albert’s earlier books.