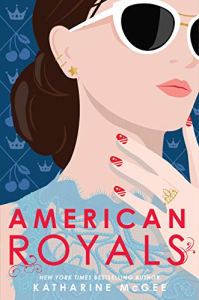 American Royals is the first book in Katharine McGee’s new YA alternative history series. I was very excited about the opportunity to read this book because the premise sounded very interesting.

The book begins with the following premise: after the American Revolution, George Washington became the new nation’s first king, and ever since then, his descendants have sat on the throne. An aristocratic class also developed, with titles like the Duke of Boston, but most of society is exactly the same.

The story begins with Beatrice, the king’s oldest child and heir, being tasked with finding a future spouse at the upcoming royal ball. From there, the story unfolds from four unique perspectives:

Beatrice, a Harvard grad, who is poised to become the first American queen in her own right. Even though she is barely twenty-one years old, she is expected to marry soon- and only someone from an aristocratic background will do. The problem is that she doesn’t have anything in common with any of the eligible bachelors on her parents’ list, but surely, there must be someone she feels a connection to.

Samantha is Beatrice’s younger sister. She and her twin brother Jefferson graduated from high school a few months ago, but they are taking a gap year. She doesn’t have as much pressure as her older sister, so she’s surprised when she meets the perfect guy. There’s just one problem…

Daphne is Jefferson’s ex-girlfriend. She dated him all through high school, but they broke up right after graduation, and then the twins left on an extended vacation for six months. Now that Jeff is back in town, Daphne is determined to get him back- by any means possible.

It’s hard to describe the plot without giving too much away, but needless to say, these four young women get caught up in all sorts of scandalous goings-on. There are secret crushes, betrayals, scheming, gossip, and devastating revelations. This book is an adventure that doesn’t stop until the book ends, and since this is a series, we’re left with a ton of questions.

The protagonists are likeable- except for Daphne, who is too much of a schemer for me to sympathize with. But she’s interesting, so I enjoyed reading her sections just as much as the others.

I would recommend American Royals. The book is pretty fast-paced; there’s always something going on, and there’s a constant flow of new developments. I didn’t realize that it was part of a series, so as I got closer to the end, I was wondering how the loose ends were going to be resolved. Needless to say, the book ends on a huge cliffhanger, which is going to leave readers clamoring to find out what is going to happen next. I know I’m hooked- I can’t wait to find out what’s going to happen next!