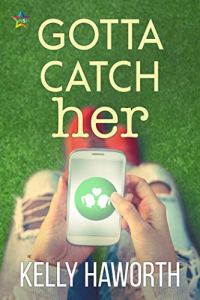 I read a lot of m/m romance- mostly, but not always, historical. I have recently decided that I need to make more of an effort to find and read more f/f romance. So, when I saw Gotta Catch Her by Kelly Haworth on Netgalley, I knew that I had to check it out.

Ann spends most of her time at her job, so in her downtime, she likes to unwind by taking her dog for walks and playing Ani-Min Move, a phone game that is just like Pokemon Go without any pesky licensing issues.

One day at the park, Ann meets Rachael, a single mother who also plays the game. There’s clearly a rapport, and there’s potential for their friendship to change into something more, but there’s never enough time for them to get to know each other- Ann’s job becomes more demanding, Rachael’s son gets sick; it seems as though their fledging relationship is doomed to fail. Is something so new worth fighting for?

This was a cute book. It’s a bit long for a novella but short for a full-length novel. I loved how much thought Haworth put into her worldbuilding: although based on a real game, Ani-Min Move is its own beast, and both the primary characters and background characters really seemed to be enjoying themselves. It’s always nice to see people connecting over a shared interest.

Most romance novels feature a dual perspective, but this book is shown solely from Ann’s perspective. She’s a pleasant protagonist; she’s intelligent, but not very confident. She’s always second-guessing herself, and this proves beneficial because the reader is placed in the same position as Ann: we also don’t know what Rachael’s feelings are.

I would recommend Gotta Catch Her. It’s a quick read, and it’s sweet. Ann and Rachael clearly care about each other, and their frustration at their failed attempts to get together is palpable. I am looking forward to reading more from Haworth in the future.