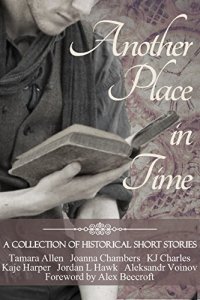 Another Place in Time is a collection of m/m historical romance short stories. I was already excited as soon as I heard about it in one of my Facebook reading groups, but when I saw that the collection included something I borrowed from my library network and had yet to add to my personal library, I was even more confident with my purchase.

Office Romance by Tamara Allen takes place after WWI. Two coworkers find themselves competing against each other to keep their jobs, all in the name of efficiency. I liked the tension in this story, and the way in which their discovery of a common bond comes as a surprise. But how will it change the outcome of the competition if only one of them can keep his job?

Introducing Mr. Winterbourne by Joanna Chambers is a Regency-era story. Lysander Winterbourne is the younger son of an earl. His sister is marrying into a family of industrialists, a match that will provide Lysander’s family with a sorely needed financial bolstering. Lysander is tasked with showing his sister’s fiancé’s older brother Mr. Freeman around Town. Lysander is less than thrilled with this task, especially since Mr. Freeman is stoic and reserved- a sharp contrast to Lysander’s gregarious exuberance. The entire story takes place over the course of a single day, as their awkwardness grows into a strong attraction that neither of them can deny.

The Ruin of Gabriel Ashleigh by KJ Charles is another Regency-era story. Ash has foolishly gambled away everything he has to Francis Webster, the son of an industrialist. Ash is summoned to Webster’s house to discuss the wager, and something rather unexpected happens. This is one of my all-time favorites, and my one complaint is that it is only a short story and not a full-length novel. This was absolute perfection and I wanted more of it.

Unfair In Love And War by Kaje Harper takes place during WWII. Warren returns home to his mother after his brother’s death. He meets Stefan, the Swiss man who lives next door. Most of their small town assumes that he is a German, and therefore the enemy. But Warren strikes up a friendship with Stefan that leads to more.

Carousel by Jordan L. Hawk is a Victorian-era American story featuring Whyborne and Griffin from Hawk’s series of the same name. It takes place between books 3-4, and it’s extra special because the story is told from Griffin’s perspective rather than Whyborne’s typical narration. As with all of their adventures, the case they are tasked with solving takes a paranormal turn. There are some minor spoilers for the first three books, but it could potentially serve as a nice introduction to the series as well.

Deliverance by Aleksandr Voinov takes place during the Crusades. William has made a home for himself with the Templars, but then Guy, a man from his past, reappears and makes him question things that he has kept walled up for six years. I took a few medieval history classes in college; one was actually devoted to the Crusades. However, I don’t read very much fiction from this era, m/m or otherwise, but I want to seek out more of it after this.

I would recommend Another Place in Time. Each of these stories is superb, and it’s hard to pick a favorite. Some of these authors were already familiar to me, and some were new. I definitely want to read more from all of these authors, and this collection is one of my favorites.