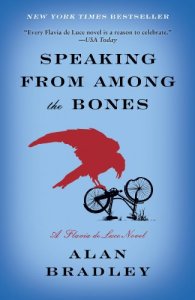 Speaking from Among the Bones is the fifth book in Alan Bradley’s Flavia de Luce mystery series. These books feature a precocious child sleuth who solves mysteries in her sleepy English village in the 1950s. I’m slightly behind with this series, but I’ve been savoring them slowly so that I don’t run out of books.

Bishop’s Lacey is preparing to celebrate the 500th anniversary of the death of St. Tancred, whose tomb is located in their village church. Naturally, Flavia wants to be there for the big event, and when the tomb is opened, they find a body. However, it’s not St. Tancred in the tomb- it’s the body of Mr. Collicut, who played the organ at church. There is no way that he could have wandered into the tomb on his own, so it’s clear that he met with a gruesome end. Who could have killed Mr. Collicut?

The best thing about this series is the delightful protagonist. Flavia is insightful and has a quick wit. I tend to listen to these books on Audible; narrator Jayne Entwistle reads with such mischievous glee, and I always laugh and laugh. Flavia is also a consummate sleuth. She doggedly pursues clues, even if it means putting herself in danger. I found the mystery portion to be satisfying as well; Bradley builds a case slowly, and I was surprised by the Big Reveal at the end.

Of course, it wouldn’t be a Flavia book without appearances from series regulars like Flavia’s older sisters and family friend Dogger. Flavia’s interactions with them are just as fun as her sleuthing. There are some important developments on the homefront, but I won’t give anything away in this review.

I would absolutely recommend Speaking from Among the Bones. Readers should begin with the first book in the series, and read the books in order. There’s a great deal of character development and backstory that will prove beneficial in appreciating the series. I am looking forward to listening to the rest of this series in the near future!