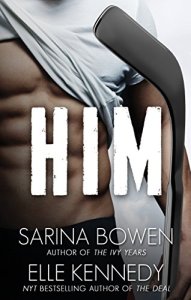 Him was written by Sarina Bowen and Elle Kennedy, and it’s the first book in their Him/Us duology of contemporary m/m romance novels. I picked up the Audible edition of this book during a sale because I’d heard a lot of chatter in one of my Facebook groups. I actually listened to this a while ago, but I am woefully behind with my reviews.

Jamie Canning and Ryan Wesley were best friends who spent their summers at hockey camp together. But things got a little weird on the last night of their final year after a dare turned into a proposition. By the time their paths cross at the college hockey championships, they have not spoken for four years, and each thinks the other is mad at him.

Jamie has continued to go to hockey camp throughout his college years, working as a counselor and mentoring teen players. Needless to say, he’s shocked when Wes shows up to work at camp too. Their friendship is barely reconciled when they acknowledge their mutual attraction. This proves to be an interesting dynamic; Wes knows that he is gay, but he’s afraid that coming out will hurt his prospects in the NHL. Jamie has always believed that he is strictly straight, but he can’t deny his attraction to Wes. They’re enjoying their time together, but at the end of the summer, Jamie is supposed to start a new job, and Wes is supposed to go to Canada to play hockey. Is this going to be a summer fling or do they have a future together?

This was such a good book. I think it works especially well as an audiobook because of the dual narrators- Teddy Hamilton and Jacob Morgan. The story unfolds from both Wes and Jamie’s perspectives, so having two narrators truly gives each protagonist a unique voice. I’m new to sports romance, but I liked the hockey theme more than I thought I would. There’s a lot of humor in the book, and just the right amount of angst.

I would absolutely recommend Him to fans of m/m romance. I tend to prefer historical m/m, but I liked this contemporary romance. I’m looking forward to listening to Us, which is the sequel, as well as Bowen and Kennedy’s other books.