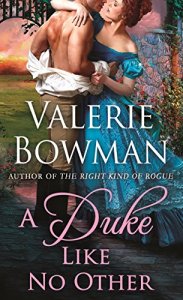 A Duke Like No Other is the ninth book in Valerie Bowman’s Playful Brides series of Regency era historical romance novels. I was excited about the opportunity to read this book because I’ve read almost all of the other books in this series, and I have been looking forward to reading this one.

Mark Grimaldi is a career soldier who has worked with some of the heroes from previous books. As the story begins, Mark learns that he is being considered for a prestigious government position. His odds of being selected would improve if he were a family man. Fortunately for Mark, he is already married. Unfortunately for Mark, he has been estranged from his wife for almost a decade.

Nicole has spent the last ten years living in France. She’s not sure what to think when Mark arrives at her house, and asks her to return to England with him and pose as his wife. But there is something that she wants as well, so perhaps a bargain can be struck. Can they find peace together after so many years of strife, or is their bond irreparably broken?

This was such a good book. We don’t initially know why Mark and Nicole are estranged, and while I won’t reveal those reasons here, I do think that Mark was unreasonable. I can understand the importance of pride and standing on one’s own merits, but it’s important to give the ones we love the benefit of the doubt. Needless to say, as they reflect back on the tumultuous events that separated them, there’s a fair bit of angst.

Another thing that I enjoyed about this book is that the narrative is interspersed with flashbacks, so we get to see Mark and Nicole’s courtship, as well as the events that led to their estrangement. They have a lot to work through, and at times, the odds seem insurmountable.

I would absolutely recommend A Duke Like No Other. This book functions well as a standalone. Most of the series regulars don’t appear in this book, so it’s not as important to read the previous books in the series. But you should definitely read the rest of the series. This was a beautiful story of reconciliation and redemption, and Bowman also includes an interesting mystery that Mark and Nicole work together to solve. I am looking forward to reading more from Bowman in the future- unless I am incorrect, she provided the foundation for the next book in the series during the course of this one!

I voluntarily read and reviewed an advance copy of this book.