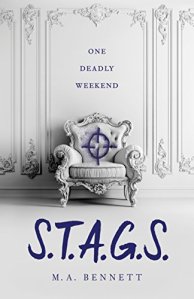 S.T.A.G.S. is a young adult novel written by M.A. Bennett. This book had piqued my interest because I love boarding school stories, and I was very excited when I finally had the opportunity to read it.

Greer is a new student at St. Aidan the Great, a posh English boarding school. She doesn’t really fit in with her peers, so needless to say, she is quite surprised when she receives an invitation to spend the weekend at the country estate of the most popular boy in the school. Henry and his friends are collectively known as the Medievals, and they serve as school prefects.

Greer is enchanted by the sumptuous estate, and flattered by the attention from Henry. She’s so wrapped up in these superficial details that she fails to notice that the weekend of “Huntin’, Shootin’, and Fishin’” has taken a sinister turn. She and her fellow guests must band together if they are going to survive the weekend.

At the risk of giving away spoilers, I will say that it seems fairly obvious that there is going to be a The Most Dangerous Game twist afoot. Bennett sets up the scene so beautifully; things are going so well, but there is something sinister lurking under the posh veneer. Even so, there is just enough evidence to suggest that Greer’s new friends are exaggerating the situation; perhaps they are jealous that she is doing a better job of fitting in with the Medievals. The book’s big climax is every bit as thrilling, even though the reader already knows the outcome.

Revealing the outcome at the beginning is a throwback to books like A Secret History, and it’s fair to say that S.T.A.G.S. is a worthy homage. However, the case is weakened by the supposition that there has been a grand conspiracy afoot for almost a thousand years, and no one has objected to it until now. Are we truly to believe that this trio of plucky Generation Z kids is the first to crack the case?

I would recommend S.T.A.G.S. I found this book to be clever, and I thought that its commentary on class and race to be very astute. I think that the changes that arise from the aftermath are exactly the sort of egalitarian efforts we’re hoping to achieve as a progressive society. I am looking forward to reading more from M.A. Bennett in the future.