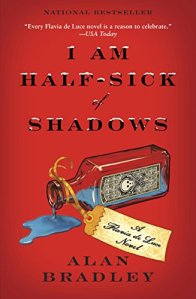 I Am Half-Sick of Shadows is the fourth book in Alan Bradley’s Flavia de Luce mystery series. I have read the first three books in this series, and I was excited to find out what was going to happen to Flavia in this book.

Flavia de Luce is a precocious young girl who lives with her father and two older sisters in Buckshaw, a crumbling manor house near the village of Bishop’s Lacy. It is the Christmas season, and Flavia’s father has rented out Buckshaw to a film company. Flavia is thrilled about this turn of events, and is even more pleased when Phyllis, the aging actress who is starring in the movie, pays attention to her.

Needless to say, it is quite distressing when Phyllis is found murdered immediately after a theatrical performance attended by most of the village. When a blizzard traps everyone in Buckshaw, Flavia comes to the terrible conclusion that there is a murderer amongst the guests!

Flavia has a strong personality, and it seems like people either love her or find her obnoxious. I am absolutely enchanted by Flavia. I tend to listen to the Audible editions of her books because narrator Justine Eyre brings Flavia to life with a subtlety sly charm. Flavia is astute, and she is prone to witty asides. This makes her appear much older than eleven years old, but there are parts of the book where Flavia seems exceptionally vulnerable, and very much like the young girl she is supposed to be.

This was a satisfying mystery. Unlike the previous three books that had Flavia gallivanting about the countryside, she is mostly confined to Buckshaw for this book. There is a nice mix of new characters to balance out appearances from series regulars like Dogger, the butler/gardener/handyman, as well as Flavia’s two sisters. It was interesting to see “pop culture” (movie star glamour) converge with Flavia’s world of staid gentility (not to mention the genteel poverty).

I would recommend I Am Half-Sick of Shadows. I would suggest reading the series in order. Flavia is an absolute delight, and as much as I enjoy the sleuthing, I would be just as happy reading about Flavia’s everyday adventures. I already own the next couple of books in this series, but I have been rationing them out; this is one series I do not want to get to the end of!