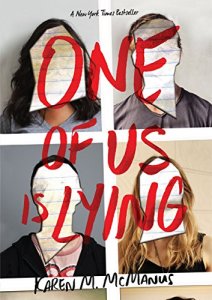 One of Us Is Lying is a young adult novel written by Karen M. McManus. I found it on the new release shelf at my town library.

Five teens walk into detention: Bronwyn is an academic overachiever, Addy is a pretty girl, Nate is a drug dealer, Cooper is a baseball star, and Simon is brooding and aloof. They are all there because they were caught with cell phones during class. There’s just one problem- the phones aren’t actually theirs and none of them have any idea what the phones are doing in their bags. They are a rather eclectic group, and don’t necessarily run in the same social circles. Being in detention for a something they didn’t actually do is the least of their concerns because by the end of detention, one of the five is dead.

Simon, the boy who died, runs a vicious gossip blog, and rumor has it (pardon the pun) that he was going to post scandalous secrets about the other four people in detention. Each one of those secrets has the potential to destroy lives- but are any of the four remaining teens desperate enough to kill Simon to keep the information from being revealed?

The story unfolds from the points-of-view of the four teens who were in the detention room that day. An investigation opens in the matter of Simon’s death, and it’s clear that the four of them are the main suspects. They all want to prove their innocence, but is it a mistake to work together if one of them could be the killer?

I would recommend One of Us Is Lying. I found this book to be a quick read, and I thought that McManus did a good job with four unique voices. She really captures the essence of being young and trying to find your place in the world, only to have a terrible catastrophe take over your life. I thought the mystery was well done. I had my suspicions, but I still ended up surprised by the big reveal. I’m looking forward to reading more of McManus’ books in the future.