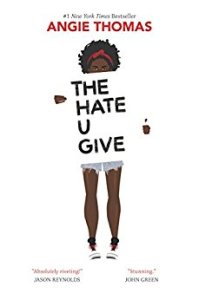 The Hate U Give is a young adult novel written by Angie Thomas. I kept hearing about how amazing it was, so I requested a copy through my library network.

Starr Carter is a typical teenager who searches for her place in the world. Her parents want her to have more opportunities than her urban neighborhood can offer, so they sacrifice to send her to a private school in the suburbs where she is one of the only African American students. She drifts between these two worlds, not feeling entirely comfortable in either. She is excited to reconnect with her best friend Khalil at a party, but when Khalil offers her a ride home, their car is pulled over and Khalil is shot by the police officer. Starr is the only witness, and initially, she takes solace in her anonymity. But when the police officer claims that she and Khalil were combative and that his actions were self-defense, Starr knows that she has to speak out.

Starr watches the different reactions to Khalil’s death in her neighborhood and her school. She’s disgusted by the way her classmates plan a protest just so they can have a day off from school. When the incident becomes a national headline, everyone has an opinion about culpability, and it seems like tensions will boil over during the wait to find out if charges will be filed against the officer.

This was an amazing book. Angie Thomas has crafted a compelling narrative that evokes so many real-life cases of police brutality. Starr’s awareness of these cases shapes her behavior and interactions with those around her; she discusses her duality at several points, how she feels that she needs to present herself in different ways in different situations.

I would absolutely recommend The Hate U Give. This is a YA book, and at times, the voice does seem very “young”, but that’s kind of the point- Starr is not supposed to be some wunderkind who’s wise beyond her years- she’s just a regular kid who gets caught up in something bigger than she could have possibly imagined. I am looking forward to seeing Angie Thomas’ next book.