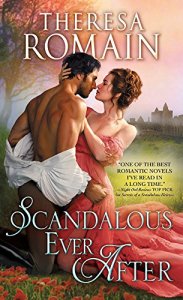 Scandalous Ever After is the second book in Theresa Romain’s Romance of the Turf series of Regency romance novels.

Evan Rhys is an antiquities expert who is planning to go to Greece, but his plans change when Lady Kate Whelan arrives unexpectedly after one of his magic lantern presentations. Kate was married to Evan’s best friend Conn, who tragically passed away two years ago. Evan had been a frequent houseguest at Conn’s Irish estate, but he has not visited- or seen Kate- since Conn’s funeral.

There is a horse racing connection to be found here- Kate’s father has one of the finest stables in the district, and in fact, Kate and Conn met all those years ago because Conn traveled to England in search of horses and returned to Ireland with a young wife. There is also the matter of strange occurrences near the Irish estate. However, both of those elements take a back seat to a much simpler story of two people trying to figure out where their relationship stands and what they mean to each other. Evan has been in love with Kate since the first time he met her, and he hated the way that Conn took Kate for granted by being unfaithful numerous times. Frankly, Kate is not sure what she wants, but she feels overwhelmed by the demands of the estate, and she appreciates the comforting presence of an old friend.

Scandalous Ever After has the perfect balance of humor and angst. Evan and Kate have good chemistry together, but there is definitely some struggling as they redefine their relationship. My favorite parts of the story would have to be the visit with Evan’s family in Wales when they were en route back to Ireland and when we finally meet Kate’s mother-in-law- good old Gwyn.

I would absolutely recommend Scandalous Ever After to fans of historical romance. I first discovered Theresa Romain earlier this year when I read Passion Favors the Bold, an entry in her Royal Rewards series. I have not read A Gentleman’s Game, the first Romance of the Turf book, but Scandalous Ever After functions well as a standalone. I have, however, added A Gentleman’s Game to my (never-ending) reading queue and I am looking forward to reading more of Romain’s books in the future.

The result is two old friends looking at each other in a new light.