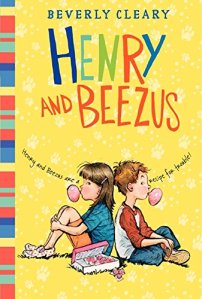 My three girls and I have been listening to the Henry Huggins series in the car. A couple of years ago, Audible had a great sale and I picked up most of Beverly Cleary’s book for about $4 apiece. The girls had not really been interested in listening to the books before, but we have been reading the Ramona books, and they recognized Henry as one of the minor characters from the Ramona series. He’s much older than Ramona, so they don’t really cross paths in her books, but she plays the role of young antagonist in his books. This was enough for them, and they were sold.

Henry and Beezus is the second book in the Henry Huggins series. Henry is a ten-year-old boy living in Oregon. He has a dog named Ribsy, and many neighborhood friends. There are many small incidents throughout the book, but the main theme revolves around Henry’s attempts to earn enough money to buy a bike. This proves to be rather difficult, and involves dubious schemes like finding boxes of gum in a vacant lot and selling it to his friends at school. Will Henry ever be able to earn the money for a bicycle of his very own?

This is a very engaging book. My girls all enjoyed listening to it, especially since Ramona plays a minor role. Henry’s schemes don’t always work out, but he always perseveres. This book was not narrated by Neil Patrick Harris like the other Henry Huggins books. The narrator- William Roberts- does a fine job, but the production had slightly less of a spark than the Harris-narrated books.

I would recommend Henry and Beezus. I don’t have any sons, but I do know that it can be hard to find books for boys because many of the books featuring young male protagonists revolve around pranks and naughtiness.  Henry always tries to do the right thing. He sometimes has some rather dismissive thoughts about the “dumb things” that girls do, but he keeps his thoughts to himself and is not deliberately rude to his family and friends. This book will appeal to middle grade readers, and younger readers might enjoy having this book read aloud.

2 thoughts on “Henry and Beezus by Beverly Cleary”