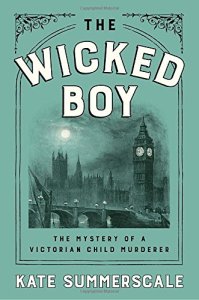 I enjoy reading about Victorian history, so I was very excited about the opportunity to read The Wicked Boy by Kate Summerscale. This is my first experience with her, and I will definitely look for her other Victorian books in the future!

During the summer of 1895, a pair of brothers named Robert and Nattie Coombes told their neighbors and relatives that their mother had gone away for awhile. They invited a family friend to stay with them for company; instead of staying in the upstairs bedrooms, they camped out downstairs. They took trips to Lord’s to see a cricket match, and they sent their family friend to pawn some household items. Eventually, relatives began to doubt the veracity of the boys’ tale and entered the locked bedroom. Mrs. Coombes was found dead, and the boys were arrested for murder.

At the trial, the lawyers argued that Robert (the ringleader) had committed the crime, but that he was insane. He had a number of “penny dreadfuls” in his possession, and these lurid books had inflamed his imagination and made him susceptible to violent tendencies. He was sentenced to the Broadmoor asylum, but the story does not end there. We learn of his time at Broadmoor, and also what happened to him upon his discharge from the asylum.

The Wicked Boy has been meticulously researched. Summerscale examined court records, newspapers, police reports, and she even read some of the same “penny dreadful” books that Robert had enjoyed. She presents a cohesive narrative of what happened from the time of the murder until Robert’s death almost fifty years later. The most interesting aspect of this book is not the lurid account of the murder and the boys’ attempt to cover up their crime; rather, the Victorian attitude toward the rehabilitation of the insane. Robert’s time at Broadmoor was not unpleasant, and by the time he left, he was quite different. This is a stark contrast to the stereotypical view of the grim asylum.

I would recommend The Wicked Boy to readers who enjoy Victorian history, as well as those who enjoy “true crime” books. The case did receive coverage in the press, but it seems to have been widely forgotten in subsequent hundred years. There is conflicting evidence regarding Robert’s sanity, and psychological methodology has changed drastically. Was he truly a “wicked boy” or was he driven to commit the terrible crime of matricide?