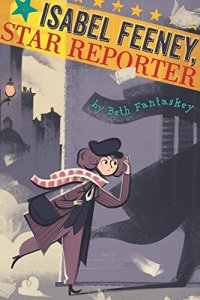 Isabel Feeney, Star Reporter is a middle grade novel written by Beth Fantaskey. Its narrator and protagonist is Isabel Feeney, a ten year old girl who works as a newspaper girl working in 1920s Chicago. One evening, she witnesses one of her regular customers greet a man and walk into an alley. Seconds later, Isabel hears a gunshot, and when she rushes to the alley, Miss Giddings is standing in the alley, and the man is lying on the ground- dead.

Of course, it seems like Miss Giddings shot the man, who turns out to be a part-time gangster. Detective Culhane thinks that she did it, and so does newspaper reporter Maude Collier. But Isabel knows that her friend Miss Giddings is innocent, and she is determined to prove it. Isabel might have to work to help her single mother earn money instead of going to school, but she knows that she has what it takes to be a newspaper reporter- just like her idol Maude Collier. And so, Isabel Feeney sticks her nose where it doesn’t belong, all in the name of justice for her friend Miss Giddings.

My oldest daughter is almost nine years old, and she and I read this book together. She tends to be sensitive, and I wasn’t sure what she would think about this book. I explained the plot to her before we began, and she said it sounded interesting. There were a couple of moments that were scary for her, but in a good way; she wanted me to keep reading, even though she was scared.

I thoroughly enjoyed reading Isabel Feeney, Star Reporter. Isabel is an intrepid narrator; she doesn’t always make the best decisions, but she stands up for what she believes. There’s a wonderful ensemble cast, including Miss Giddings’ son Robert, a polio survivor; and also Charles Bessemer’s daughter Flora, an aspiring Hollywood actress. These children prove to be valuable allies in Isabel’s quest for justice.

The setting is wonderful, and Fantaskey includes many details that add to the ambience, making 1920s Chicago come alive. The city is a ruthless place, where murders are commonplace events. Everyone thinks that Miss Giddings gunned down her mobster boyfriend, just like countless other cases involving female murderers.

I would absolutely recommend Isabel Feeney, Star Reporter to middle grade readers. My daughter says that she likes how Isabel was curious and adventurous. She says that she thought the mystery was a little tricky to solve, and she was surprised at how things turned out. As a parent, I think that this to be a well-written story; the banter between the characters is witty, and I found myself wishing we could find out what happened to some of the characters after the events of the novel. We are looking forward to more middle grade novels from Beth Fantaskey!

One thought on “Isabel Feeney, Star Reporter by Beth Fantaskey”