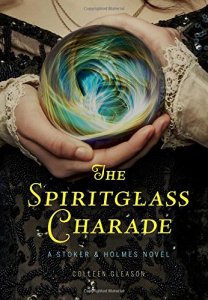 I love young adult books, and I love books set in the Victorian era. Coleen Gleason’s Stoker & Holmes series combines both of these elements, and adds a partnership between Bram Stoker’s sister and Sherlock Holmes’ niece. I have recently finished listening to The Spiritglass Charade, which is the second book in the series.

Mina Holmes and Evaline Stoker have already solved one mystery, but they are asked by Princess Alix for assistance with a rather delicate matter. A young aristocratic woman has been increasingly involved with spiritualism following the death of her mother and the disappearance of her brother. The princess fears that Miss Aston is being taken advantage of, because mediums are believed to be charlatans who take advantage of mourners. But of course, nothing is as is seems, and the two young women find the case to be far more complicated than it appears. Throw in evidence of vampires, and you’ve got an intriguing case that Mina and Evaline are determined to solve!

The story unfolds with each girl narrating alternating chapters, so we are often treated to an event from both perspectives. Mina is very logical and calculating; she claims to know all of the tricks mediums employ, and refuses to believe that they are really connecting with the dead. Evaline is much harder to convince; she hunts vampires, and is well acquainted with phenomena that cannot be explained. Their personalities are different, and it’s so enjoyable to see them interacting with each other.

It should also be noted that this story takes place in an alternate Victorian London, where electricity has been banned. Machines are steam powered, and society has been highly mechanized. The enigmatic Dylan returns, and I won’t say anything more about him to avoid spoilers for those who haven’t read the first book in the series.

I would absolutely recommend The Spiritglass Charade. I would suggest reading The Clockwork Scarab first; there are several important elements that will help the reader understand the plot of this book. The mystery is not particularly difficult to solve- there aren’t that many suspects. The alternate Victorian London, the banter between both girls, and even the hints of romance all help to make this book enjoyable. I am looking forward to reading the third book in this series soon.