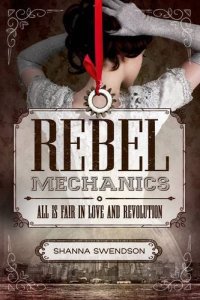 I first found out about Rebel Mechanics on Goodreads, and I made a request through the library network. It was available in a digital edition, which was just great- three cheers for instant gratification!

Rebel Mechanics is a YA novel written by Shanna Swendson. This is a work of historical fiction, and takes place in an alternate New York City in 1888. In this world, America did not win the Revolutionary War, and is still a British colony. The aristocracy -magisters- use magic, which is forbidden to everyone else. The working classes are developing illegal mechanical devices to overthrow the colonial government.

Verity Newton accepts a governess position in an upper-class household. She did not encounter magisters or “rebel mechanics” in New Haven, but she meets both almost as soon as she arrives in the city. She empathizes with the rebel cause, but she also becomes attached to her magister employers because she is treated like one of the family. She also suspects that the children’s guardian- their handsome young uncle- might be hiding secrets of his own.

Rebel Mechanics is an exciting book. I liked the mashup between magic and steampunk, and that all of it had this quasi-Victorian backdrop. Verity finds friendship amongst the rebels, but she also loves the family she works for. There’s even a love triangle that develops, and I know who I’m rooting for!

I would absolutely recommend Rebel Mechanics. This appears to the beginning of a new series. Secrets are revealed, and things are set up nicely for the next book in the series. It’s interesting to see the rebels fighting for American independence over a century later than our conventional timeline. I am certainly looking forward to finding out what is going to happen to Verity next!