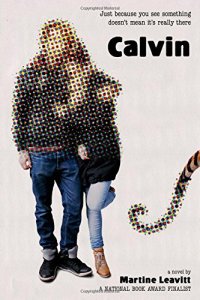 I was not familiar with author Martine Leavitt when I received the opportunity to review her novel Calvin, but I was intrigued by the premise. My oldest daughter is a huge fan of Calvin and Hobbes, and her passion has helped me to rediscover a comic strip from my youth. I used to love reading Calvin and Hobbes with my father, who passed away a few years ago, so it is very special that my daughter loves Calvin and Hobbes as much as he did.

I do want to clarify that Leavitt’s novel Calvin is intended for a young adult audience. Calvin is the story of a young man named Calvin who believes he has a personal connection to the famous comic strip. Not only does he share a name with Calvin, but he also has a stuffed tiger named Hobbes, and he was born on the day the last strip was published. The stuffed Hobbes was lost in a washing machine accident years ago, but he has returned- except this time, Calvin is the only one who can hear Hobbes talking. This is one of the reasons that lead to Calvin’s diagnosis with schizophrenia. He is convinced that there is a connection between his life and the fictional Calvin. He needs to persuade Bill Watterson to draw one last strip in order to cure his schizophrenia. So, Calvin decides to walk across a frozen Lake Erie with his neighbor Susie in order to meet Bill Watterson.

The most wonderful thing about this book is that it brings awareness of mental illness. Schizophrenia affects millions of people around the world, but it has been highly stigmatized. Calvin is an extremely likeable narrator. His plan for a cure is completely unrealistic, but I couldn’t help but root for him. At times, Leavitt brings a sense of lightness to a serious subject, but it’s clear that Calvin is tormented by Hobbes and he is willing to do anything to get Hobbes to leave him alone.

While I do not want to give too much away, I will vaguely allude to a more suitable treatment plan being put into place eventually. But during the story, we are treated to a magical journey. Calvin and Susie have many surreal experiences as they travel across the frozen lake. Part of this is due to a narrator whose sense of reality is distorted, but there truly does seem to be something magical happening to Calvin and Susie during their journey.

I would recommend Calvin. As I have mentioned, this book is best suited for a young adult audience. This is a unique reading experience about growing up, friendship, and compassion. The premise might be outlandish, but it also provides the reader with a real look at schizophrenia, and in many regards, Calvin is just like any other teenager.