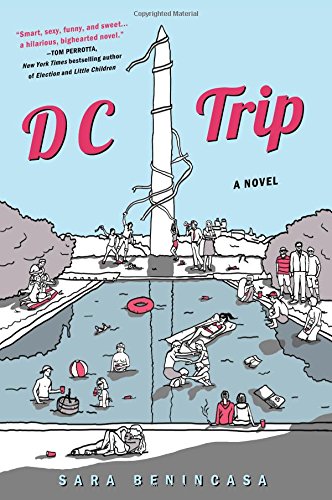 I received a copy of this book in exchange for an honest review.

A trip to our nation’s capital city is a rite of passage for many American schoolchildren. I sold candy bars and wrapping paper to offset the cost of a sixth grade trip in 1991. Now, given that the internet was not invented yet, and we had not been emboldened by social media, I cannot report any shenanigans aside from eating handful of salt at a suburban Virginia Chi-Chi’s. When I received an opportunity to read Sara Benincasa’s new novel D.C. Trip, I was very excited. A group of high school students with only two chaperones- what could possibly go wrong?

Three of the students- Gertie, Rachel, and Sivan- are determined to sneak out and have a wild adventure, especially after they find out that Gertie’s crush from summer camp is also on a school trip to Washington. There’s only problem with this: their rivals are determined to stop them.

Chaperone Alicia signs up for the trip after she finds out that her faculty crush is the other chaperone. Alicia and Bryan had a disastrous encounter at the beginning of the school year, and they have been awkwardly avoiding each since then. Could there possibly be a better meet cute than chaperoning a bunch of teenagers determined to break the rules?

If I say anything more about the plot, I’ll begin to give away spoilers. This book is best enjoyed if you know as little as possible about what actually transpires over the course of this book. All that you need to know is that this book is hilarious. Many of the situations are over the top, and that is the intention. Think of your favorite R rated comedy, and convert it to book form. That’s what D.C. Trip is. It’s one big literary R rated comedy.

I would recommend D.C. Trip. Sara Benincasa has a wicked sense of humor, and that is reflected in this book. There are also some deeply poignant moments; growing up and finding your place in the world is hard, but there is no better place to do that than at our nation’s capital. Benincasa also effortlessly blends bitingly satirical social commentary in with the shenanigans, making this book an absolute delight.