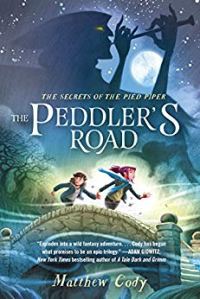 I received a copy of this book from Netgalley/the publisher.

Max (short for Maxine) and Carter are two children living in the modern era. They are staying in Hamelin with their father, a folklorist. By the time they realize they are caught up in the Pied Piper story, they are whisked away and taken to the Summer Isle.

They tell Carter and Max that life on the Summer Isle is not always idyllic, and that terrifying creatures come out at night, like the giant rats. They also tell Max and Carter that they believe that their arrival signals fulfillment of an ancient prophecy. The two modern children must set aside everything they have been told about magic not existing, and join their new friends on a quest to the other side of the Summer Isle. The journey is long and dangerous, but if Max and Carter ever want to get home, they need to search for the secrets of the island and its most famous resident.

Over the course of the story, Max and Carter must both search evaluate what they want from life. Max is brash and abrasive, and needs to learn to work with the other children. Carter wears a brace on his leg, and has always been more of an observer. But on the Summer Isle, the other children value his opinion. He has an opportunity to take on more of a leadership role, but he needs to believe in himself.

In addition to a village of ageless children, Cody has filled the island with all sorts of magical creatures. From the mischief of rats (the proper name for a group of rats) enmeshed in a power struggle, to the house on chicken legs owned by a witch, the island is teeming with magic. The children of New Hamelin (as they have named their village) have held their own for hundreds of years, but can they withstand this latest onslaught?

I would recommend The Peddler’s Road. This is the first installment of a planned trilogy called The Secrets of the Pied Piper. I knew this, but I was still a little surprised when the story ended so suddenly. Talk about a cliffhanger! This is a fun and original adventure story. There is plenty of excitement and some scariness, which makes this ideal middle grade fare. I am certainly excited for the next book in the series, and I suppose I will have to content myself with reading Matthew Cody’s other books in the meantime.